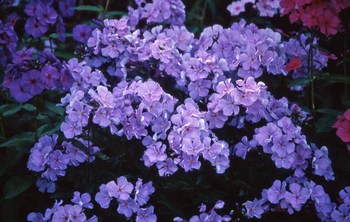 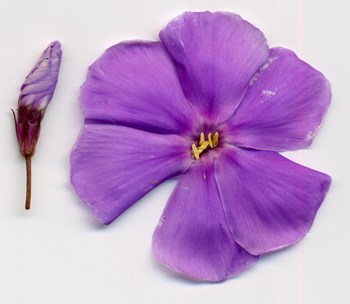 This cultivar is believed to have been introduced by Bonne Ruys in 1927. Ruys was a Dutch nurseryman who founded the Moerheim Nurseries in about 1888 (Moerheim was one of the most influential perennial nurseries of the 19th century and made many introductions of phlox, heleniums and other perennials). Phlox p. ‘Caroline van den Berg’ was included in the RHS Phlox Trial in 1933. Phlox reached the height of their popularity in the early 20th century, but subsequently suffered a downturn as perennial gardening came to be thought of as ‘old-fashioned’.

Phlox p. ‘Caroline van den Berg’ grows to an average height of around 1m and produces loose panicles of lavender flowers with a deeper eye from July to October. It is at its bluest in early morning and in the evening when the air is cooler, taking on a more purple/puce tinge in the heat of the day. Jennifer Harmer says “this is one of my favourite phlox but it does not have particularly good foliage so its first foot or so should be covered by other plants”.

Most phlox are derived from the American native Phlox paniculata, a plant that grows along woodland edges, and in the wild the flowers are usually pink. Phlox grow well in partial shade in rich soil that does not dry out. Clumps should be lifted, divided and replanted into enriched soil every few years. They prefer a neutral to slightly alkaline soil.

Like many older phlox cultivars P. paniculata ‘Caroline van den Berg’ is prone to powdery mildew when conditions are humid or in dry soils. Although not fatal it can reduce flowering and lead to early leaf drop - good growing conditions are the best approach.

Introduced to the Conservation Scheme in 2008, it is now listed by only one nursery in the RHS Plantfinder. Does anyone know who Caroline van den Berg was?