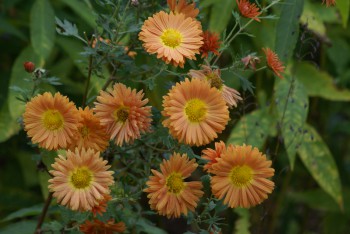 This hardy chrysanthemum was introduced to the Conservation Scheme in 2002 with a plant from Collinwood Nurseries* and has been grown by a number of local groups. Although plants were requested for the Plant Exchange this year none were brought.

C. ‘Lucy Simpson’ has orange buff flowers up to 5cm across that are classed as layered singles with 3 layers of petals that pale towards a yellow centre. The plant has somewhat lax growth to 76cm height and flowers from mid-September to the end of October. It does best in moisture retentive soil in full sun where the sheen on the petals make the flowers glow. Propagation is by cuttings or division. Plants may be susceptible to rust and the emerging foliage in spring is attractive to slugs and snails.

The original plant was raised by Fred Simpson of Otley in 1938. He started a poultry business in Otley in 1931 when he was aged 34 and for the next 20 years he selectively bred better poultry before turning to horticulture at the age of 54, initially growing wallflowers and gladioli. He received some Korean chrysanthemums sent from America and whilst those original plants were tall and straggly with a poor colour range and rather late flowering for the north of England he saw their potential and set about breeding better forms. In 1938 his first three varieties of Otley Korean chrysanthemums were put on the market. These were C. ‘Lucy Simpson’ named after his wife, C. ‘Margaret Simpson’ and C.’Grace Simpson’ named after his daughters. He also bred a range of phlox before retiring from the nursery business in 1955.

The Korean hybrids do not originate from Korea, but were developed in the United States during the 1930s by a Connecticut breeder, Alex Cummings. One of the plants he used in his breeding programme was thought to be C. koreana from plants that had been collected by the famous plant hunter Ernest Wilson while on an expedition to northern Korea for the Arnold arboretum.

Only 1 supplier was listed in the 2015 RHS Plantfinder, and whilst it doesn’t appear in the 2016 edition that supplier does still have it on the mail order list.