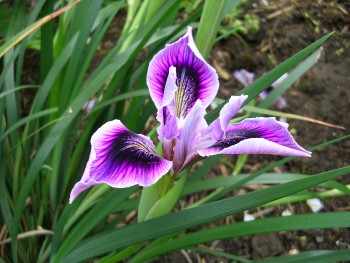 Now difficult to find, Iris ‘Amiguita’ is a compact Californian Hybrid with a striking flower. It was registered in 1947 by Eric Nies (1884-1952), an American iris breeder. Best known for his work on spuria irises, for which there is a Nies Award, he was one of the first hybridisers to introduce and register Pacific Coast hybrids. He collected from the wild, intercrossing his many primarily douglasiuna selections. I. ‘Amiguita’ has been extensively used by other breeders and was recognised by the American Iris Society with an Honourable Mention in 1951 and awarded the Sydney B. Mitchell Award in 1974.

Flowers appear in May and June above the fans of rather stiff dark green leaves, and are violet blue bitone with a dark purple signal spot on the falls. The petals are slightly ruffled. It grows to a height of about 40cm and the clump will slowly increase. It grows best in a neutral to acid , free-draining soil in a sunny or part-shaded position. It is relatively trouble-free, requiring only a tidy of the leaf fans in spring. Propagation is by division, but only when the plant is well established and divisions should consist of at least 3 fans of leaves or they may not survive.

Iris ‘Amiguita’ was introduced to the Conservation Scheme by the Hampshire Group although it is not known when it became a conservation plant or the provenance of that plant. It is not listed in the RHS Plantfinder.