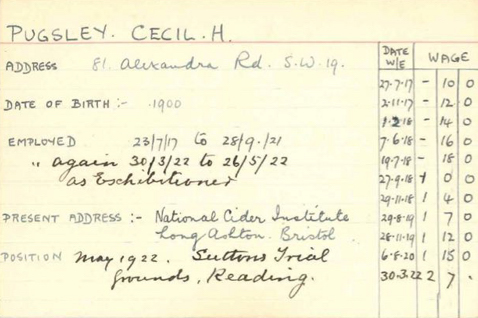 'Exhibitioner’ means he was on the 2-year student gardener scheme. John Innes doesn’t seem to have any record of him after 1922. He didn’t go to Hertfordshire when the JI Institute moved there.
I haven’t yet followed the trail to the National Cider Institute.

David Ward, Garden Director at The Beth Chatto Gardens, said that he could find no record of where they had obtained B. ‘Pugsley’s Pink’ to enter into the RHS Bergenia Trial. So the trail may have gone cold.

A Pair of Phlox
The Conservation Scheme has listed a number of Phlox cultivars, two of which have never been featured in these articles and about which little is known. Phlox ‘Milly van Hoboken’ was introduced in 1998 but who by or the reason for inclusion was not recorded and Phlox ‘Terry’ in 2002 by an HPS member on the recommendation of the National Collection holder at that time. Plants have been grown by a number of local HPS Groups within the scheme, but seem not to have been propagated in large numbers and plants brought to the annual Plant Exchange tend to be small, often failing to survive their first winter. We will need to look carefully at the merits of these plants and consider whether they should be kept in the Scheme.

Sue Catchpole On 02.05.2017
Hi Jan, Cheshire member Chris Everett grows a number of phloxes, Millie van Hoboken in particular. She rates it but I seemed to lose it every year in my last garden. I will have a chat with her at our next meeting. Chris's garden has a stream as one boundary. Reply to this comment
Showing 1 to 1 of 1 (1 Pages)