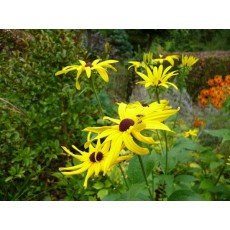 A late summer perennial daisy raised by Anthony Brooks who bred several good plants at Elton Hall, Shropshire where he was head-gardener, naming them after his prize winning wheaten terrier dogs. He submitted this particular Rudbeckia to the RHS Trial of Perennial Yellow Daisies (1998-2002) where it was recommended for an AGM subject to availability in the UK. Described in the Trial summary as “Less stiff in habit than is typical for the species with well-spaced, chocolate brown-centred flowers. Very clean foliage. Requires staking.”

Flowering from early August to late September it is a valuable addition to the late summer garden. 1.7m x 1.3m clumps produce single flowers up to 8cm diameter with pointed golden yellow petals, the tips of some being twisted or turned back, giving them a slightly ruffled look. It does well in full sun, but will tolerate some shade and requires moisture-retentive soil. Clumps may be divided in spring or autumn. Young foliage is susceptible to snails and slugs and growth is weak in dry conditions.

HPS Shropshire Group introduced it to the Conservation Scheme in 2005 and it has been grown by several local groups in the intervening years. This year (2017) it is listed by 3 nurseries in the RHS Plant Finder although seems to have fared better in Europe where it suits the fashion for naturalistic planting of grasses and perennials