Conservation Plants - Where are they now?

What happens to plants that are taken into the Conservation Scheme? Suggestions of suitable plants come from Hardy Plant Society members, via the local group co-ordinators, and are often plants that they have grown for some time, plants that do well for them, but are not often to be found in nurseries and garden centres. When the group coordinators meet annually any new suggestions are discussed and a decision is made about whether or not to include those plants. Ideally there will be a small number of plants to distribute among the keen growers of several groups who will then grow them on in their own gardens for the next few years, propagating more plants for the Scheme and for local group plant sales. At each annual meeting the conservation scheme plants are reviewed and their merits (or otherwise) discussed. The best outcome is when nursery owners become interested and judge that there is commercial potential. Other indicators of a more secure future could be inclusion in a National Collection or, in a few cases, recognition of garden-worthiness by the award of an RHS Award of Garden Merit (AGM). 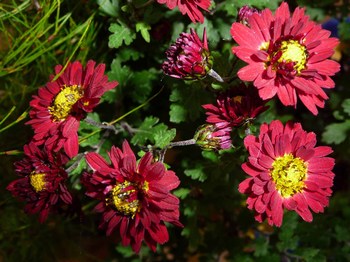 Chrysanthemum ‘Buxton Ruby’ was added to the Scheme in 2008 or 2009, but unfortunately we don’t know any details although I believe it was bred in Norfolk so may have come from that local group. At any rate it was taken off the list in 2011 because it was listed by 10 nurseries in the RHS Plant Finder. However, this year there is only 1 Plant Finder listing and in 2016 it was registered with Plant Heritage’s Plant Guardian Scheme (meaning that there are two or fewer suppliers in the current RHS Plant Finder). 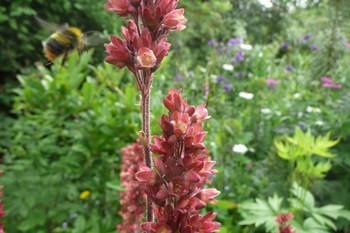 Heuchera ‘Brown Finch’ came onto the list in 2010 at the suggestion of a local HPS member and quickly attracted attention. By 2015 it was listed by 6 nurseries and taken off the Active List. This year it still has 6 listings (sometimes appearing as H. ’Brownfinch’) and hopefully will continue to do well. 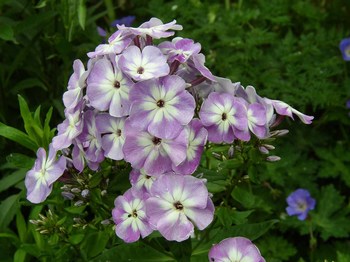 Phlox paniculata ‘Grey Lady’ is one of the oldest plants on the Scheme dating from 1993. Bred at Apple Court Nursery in Hampshire by Diana Grenfell it was not made commercially available. In 2013 it was awarded an AGM in the RHS Phlox Trial and has had several mentions in the press, by Val Bourne in The Telegraph, December 2012 and in the July 2015 edition of The English Garden magazine. It is now listed by 5 nurseries in the RHS Plant Finder and will be counted a success if this is still the case next year*.

1 Comments To "Conservation Plants - Where are they now?"

Jaime Blake On 24.02.2018
Chrysanthemum 'Buxton Ruby' was named by Brenda Reed (past General Secretary of Norfolk Plant Heritage). She bought the plant from Wootens Nursery (Wenhaston) without a label. She took it back there a year or so later and they did not know the plant and couldn't put a name to it. So Brenda named it after the village she lives in. It is very late into flower, hardy and reliable. Reply to this comment
Showing 1 to 1 of 1 (1 Pages)