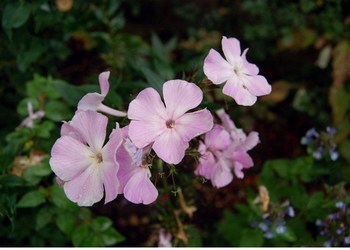 This pretty phlox was first brought into the HPS Conservation Scheme in 1998, but the name of the HPS member or local group that proposed it or the reason for inclusion is not known although the plant was obtained from Primrose Cottage Nursery, Manchester.

It was raised in 1922 by Bonne Ruys (1865-1950), the Dutch nurseryman who founded the Moerheim Nursery and father of the celebrated garden designer Mien Ruys. Bonne Ruys also bred Phlox ‘Caroline van den Berg’, another plant in the Conservation Scheme. I have not been able to identify either lady these phloxes were named after. Clearly Phlox ‘Milly van Hoboken’ gained widespread popularity as it was listed in Dreer’s garden book (Philadelphia 1926) and mentioned by Elizabeth Lawrence, gardener and writer from North Carolina in her book ‘A Southern Garden’ (published in 1942), where she describes it as a “late, tall, pink phlox”.

It is difficult to know when or why P. ‘Milly van Hoboken’ fell out of favour, but she does still have admirers - John Grimshaw chose her for his Plant of the Day Tweet, describing it as “seldom seen, good clean pink, sturdy dark stems, no mildew, glows in low light”.

Now it is listed by just 2 nurseries in the 2017 RHS Plant Finder.