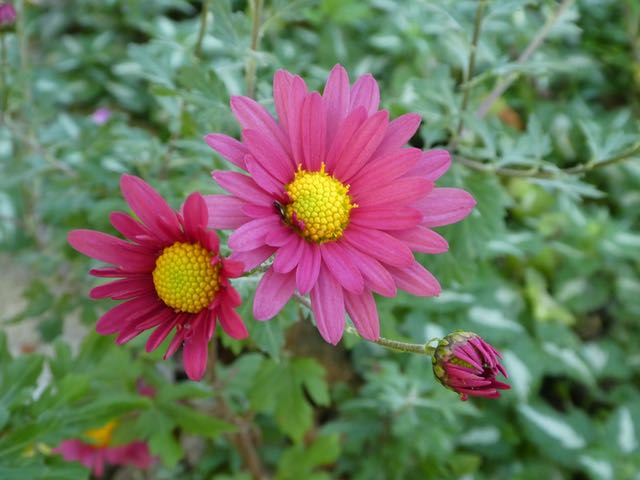 This is a plant that's been looking superb over the last week or so, coming into flower in late October here in the Midlands, with the changing of the clocks signalling shorter days now as the year comes to a close. Chrysanthemum 'Dulwich Pink' was awarded an AGM in 2012 after the RHS Trial of Hardy Chrysanthemums 2010-2012 at Wisley, a period that included the coldest December since 1890, with the temperature at Wisley falling to -17°C, so no doubt about the hardiness of this cultivar.

Chrysanthemum 'Dulwich Pink' was raised in Dulwich and found growing in Dulwich Park, but its origins are something of a mystery, although perhaps not so surprising as in his article 'People in Glasshouses - pioneers of Dulwich’s horticultural legacy' in the Journal of The Dulwich Society: January 2017, Brian Green writes that

"By the Edwardian period, the cultivation of chrysanthemums had also become very popular locally among the emergent lower middle class as well as the upper classes. R B Leach, gardener to the chemist and inventor of the famous fruit salts, James Eno, who lived at Woodhall, College Road, won third prize in 1912 in the national chrysanthemum show. In 1916 the Dulwich Chrysanthemum Society was formed, which still exists although it later amalgamated with an allotment society to form the Dulwich Horticultural and Chrysanthemum Society."

Chrysanthemum 'Dulwich Pink' is a late-flowering spray chrysanthemum with a compact habit and its bright mid pink single flowers with a yellow eye are weather resistant. It is easy to grow in any good garden soil and does best in a sunny spot.