Erigeron are daisy-like flowers belonging to the Asteraceae, and those most commonly seen in gardens are E. karvinskianus AGM and the larger hybrids, bred from E. speciosus. The latter seem to have declined in popularity, perhaps because although easy to grow, they do best when divided regularly every second or third year. 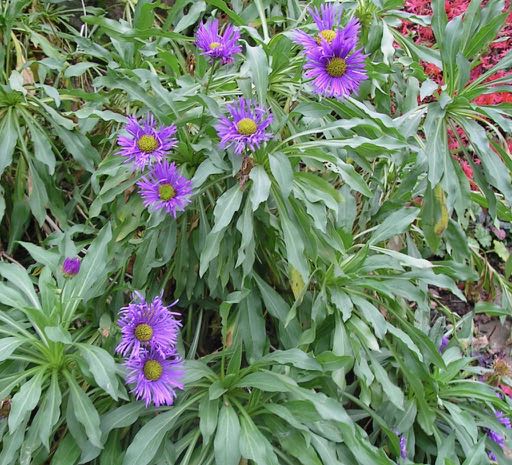 Alan Bloom raised a number of erigerons from the 1940s onward, including the 'ity' series. However they proved to be "disappointing" when some failed to survive hard winters and others were too similar. He wrote that "Some of the 'ity' erigerons proved unreliably perennial, and I have lost the dwarfist of them - 'Dimity', with its long display of pink flowers." (Introductions from Bressingham by Alan Bloom originally published in The Hardy Plant 1985 Vol.7, No.1)

Erigeron 'Sincerity' is now only listed by one nursery in Europe although it does not appear on their current online sales list. It was introduced to the Conservation Scheme in 2001 as being of historical interest. It has blue-mauve flowers with yellow centres on upright stems held above the foliage.

These early-summer flowering daisies prefer well-drained soil in full sun and work well with silver or dark foliage plants.
Easy to grow, they have an unfortunate reputation for being irresistible to rabbits.

It is a good idea to cut them back after flowering and either divide them or take basal cuttings in spring as they are starting into growth.