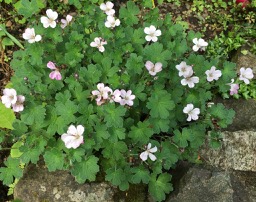 It was discovered as a chance seedling found in a paving crack by Juliet Robinson, a past secretary of the HPS Hardy Geranium Group, and described as having bushy mounds of soft grey-green leaves to 10-15cm covered from May onwards with abundant shell-pink flowers. The flowers have 5 petals that have a lovely sheen. The plant is a sterile hybrid, producing no seed, which results in a prolonged flowering period through the summer to at least September when flowering is halted by a drop in temperature. With abundant, open flowers it is attractive to bees and other pollinating insects. It requires a sunny position in well-drained soil at the front of a border and does not thrive if overwhelmed by neighbouring plants. There have been no reports of problems with pests or diseases and it is tolerant of a range of soil types as long as the drainage is good. 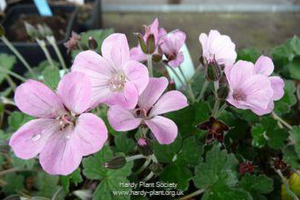 The parentage of this plant is uncertain, but suggested to be a cross between G. antipodeum (itself a hybrid between G. traversii and G. sessiliflorum) and G. x oxonianum. Several groups are now growing this plant in various situations across England and it seems to be reliably hardy and well-liked. Divisions can be rooted easily in spring under cover and grow rapidly to flowering size although some reports suggest plants have taken a season to settle after planting into the garden before starting to flower.

Listed by only 4 nurseries in the RHS Plant Finder, this is an increase from the 2 listed sources in 2015 and although there are a number of smaller hardy geraniums available there is no denying that this is a very attractive plant.

Linda Crowther On 29.08.2020
I was very lucky to obtain 2 small plants from Sally last weekend and I have planted them today in different positions. I am looking forward to reaping my rewards next spring. Hopefully I will be able, to propagate these and return extra plants to the conservation scheme in due course. Reply to this comment
Showing 1 to 1 of 1 (1 Pages)