Hemerocallis 'Hyde Hall' is one of five new plants suggested as suitable for the Conservation Scheme. Over the coming months several local groups will be growing and evaluating whether this plant deserves to be more widely grown. 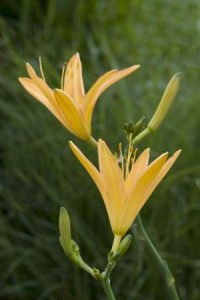 Unlike many other plants in the Scheme, Hemerocallis 'Hyde Hall' is not a particularly old cultivar nor was it widely available commercially - the name is only 'tentatively accepted' by the RHS and it does not appear in the Plant Finder.
BUT it is a late flowering variety, not usually in bloom before August, and that may make it less susceptible to hemerocallis gall midge. Contarinia quinquenotata is a tiny fly that lays eggs on the developing flowers buds of day lilies. The feeding activities of the larvae inside the buds causes them to become abnormally swollen and closer investigation will reveal numerous, almost transparent maggots up to 3mm long crawling about in a watery fluid. These flower buds either drop off or fail to open. The insect is most active during late May to early July and damage is less likely to occur later.

Growing to a height of 75cm, it is deciduous with typical mid-green broad strap-like leaves that emerge from early spring when it can be susceptible to slugs and snails. It is hardy and tolerant of a wide range of conditions, doing well in full sun or light shade. The single, upward-facing flowers are held on strong stems and are an attractive apricot colour. Established clumps can be divided in spring.

Hemerocallis 'Hyde Hall' was bred by Chris Bonanni of Cold Harbour Nursery in Wareham, Dorset, who specialised in hostas and hemerocallis and showed at RHS Chelsea and Hampton Court Flower Shows. Hemerocallis 'Hyde Hall' was selected by Chris in 2011 and was intended for launch at a Plant Fair at the RHS Hyde Hall Garden, but this failed to happen and the name was not registered with the American Hemerocallis Society and its parentage not recorded. Sadly Chris Bonanni retired in 2013 due to ill health, but HPS Essex Group have continued to grow and propagate this plant.