There are not many spring -flowering plants on the Conservation List, so it was good to have this suggestion from HPS Hampshire Group.

Epimedium are an attractive addition to the spring garden, many have brightly coloured new foliage and exquisitely dainty flowers on long stalks. Epimedium species started to arrive in Europe in the nineteenth century from Japan with only one, E. alpinum, mentioned by Gerard in 1597 and native to south and central Europe; E. perraldianum was introduced from Algeria in 1862. More recently, China has excited large numbers of plant-hunters, including Roy Lancaster who, with Mikonori Ogisu, has introduced many new species of epimedium to cultivation. When seed is brought back from a plant hunting expedition, plants find their way into nurseries and before long new cultivars emerge thanks to the skill of the hybridists. Epimedium 'Milky Way' is thought to be a cross selected by Robin White of Blackthorn Nursery in Hampshire from seed given to him by Roy Lancaster. Blackthorn Nursery closed in 2008 and a plant of E. 'Milky Way' was given to a member of HPS Hampshire Group. 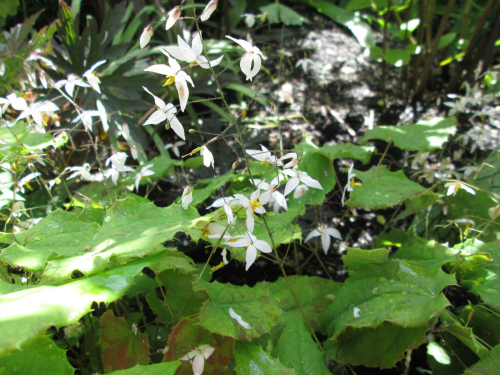 Epimedium 'Milky Way' forms a mature clump approximately 30cm x 30cm; the new spring foliage is attractively speckled with deep purple and leaves mature to green with a silver overlay on the main veins; these are semi-evergreen, often persisting through the winter. Clusters of small white flowers with yellow stamens are held on long stems in April and May.

Epimediums have a reputation for tolerating dry shade, but the asiatic epimediums need a moisture-retentive soil in part shade to do well. Before the flowering stems emerge in spring remove the old foliage which may have become spoiled by the weather. Plants grow from a woody or wiry rhizome, forming low-growing, slowly spreading clumps. Established clumps can be divided during early summer or autumn after flowering has finished. Epimediums are fairly trouble-free although vine weevil may damage the rhizome, especially if plants are grown in pots.

Unfortunately, there is confusion around the name 'Milky Way' as there is an E. x youngianum 'Milky Way' derived from two Japanese species and it is also a synonym of E. 'Amanogawa', another Japanese hybrid. Keith Wiley of Wildside Garden in Devon was also a recipient of Robin White's plants and the National Collection holders in Essex describe it as similar to E. stellulatum, another Chinese introduction most commonly seen as E. 'Wudang Star' introduced by Roy Lancaster and it will be interesting to grow this and E. 'Milky Way' together to see what differences there may be.

This highlights one of the challenges of conserving plants, trying to ensure that a plant is what it you think it is and is distinct from other similar cultivars. There is a good record of provenance here so we will grow, observe, and assess the garden worth of this cultivar over the next couple of years.