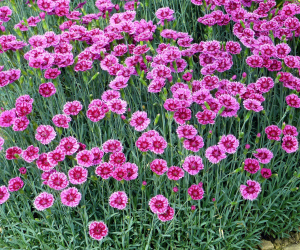 Pinks have been grown in our gardens for centuries, loved for the neat clumps of grey-green grassy foliage and pretty clove-scented flowers. Descended from Dianthus plumarius, pink refers to the fringed petals that often look as though they have been cut by pinking shears as well as the colour of the flowers which can range from white to dark maroon.

Plant breeders have produced plants with a wide variety of flower variation, but an important development came at the beginning of the 20th century. The Allwood brothers, Montagu, Edward and George, started Allwoods Nursery in 1910 and became leading dianthus specialists. Their work hybridising pinks with the closely related perpetual carnation resulted in a range of repeat-flowering pinks originally known as Dianthus x allwoodii (now Dianthus Allwoodii Group).

According to the International Dianthus Register and Checklist 2016 (held by the RHS), Dianthus 'Gold Dust' is said to have been raised from a batch of Allwoodii Alpinus Group seed around 1970 and named by S. Jackson in 1981 who found the plant in a garden in the East Yorkshire town of Beverley.

The garden owner had bought it from a stallholder at a local fete who had grown it from seed. It can also be found under the names D. 'Gold Flake' and D. 'Gold Fleck', although it is not easy to find and of the 5 nurseries that list it in the 2019 RHS Plant Finder only one offers plants for sale.

Dianthus 'Gold Dust' has well-scented single dark red flowers with the fringed petals appearing to have been 'dusted with gold'. Flower stems are 15-20cm, held above the foliage.
Plants have been grown by members of HPS Hampshire Group who would like to ensure it is kept in cultivation. The Conservation Scheme would not usually take alpines as they may be more difficult to grow in the open garden and so this plant will be evaluated by the growers for a couple of years.

Dianthus are usually easy to grow although they need a sunny position with good drainage and do not thrive on acidic soils. They are generally free of pests and diseases and are easy to propagate from soft cuttings or slips in a gritty compost. Take non-flowering shoots, either by cutting below a pair of leaves or pulling the shoot away from the stem (slip) and trim away the lower leaves to prepare the cutting. Plants do tend to become leggy, so as well as removing spent flower stems and clipping them to maintain the shape of the plant also be prepared to replace plants every 2-3 years.

0 Comments To "May 2020 Conservation Feature"