This is one of a number of new Phlox paniculata cultivars added to the Conservation Scheme last year by the Hampshire Group who have been growing Phlox paniculata 'Maude Stella Dagley' for over 15 years. The plant was thought to have been raised by Terry Dagley, an HPS member living in Worcestershire and named after his mother. Special Perennials Nursery in Cheshire list it after finding it on a plant sales table some years ago and recommend it for it's long flowering season from mid-July until October, suggesting it looks good in combination with dark flowered Centaurea 'Jordy'. The pale pink flowers with a white eye and pale edge have a particularly good fragrance. It is shorter than some usually growing 60-90cm tall and doesn't require staking. 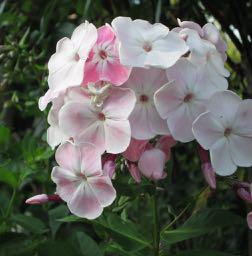 Phlox paniculata is native to Eastern USA and Canada and plants with mauve flowers were brought to Britain around 1730, but it was not until the early 1900's that plant breeders set about improving plants for the cut flower trade although it became popular in late Victorian and Edwardian gardens and a favourite of Gertrude Jekyll.

Phlox paniculata cultivars are good mid to late season perennials for the border and are easy to grow in any good garden soil that doesn't dry out, in sun or part-shade, where they form slowly spreading clumps of upright stems bearing branched panicles of flower.  Plants should be deadheaded regularly to prolong flowering and cut back to ground level in the autumn.

Propagation is not difficult if established clumps are divided in spring or autumn or new plants can be raised from basal cuttings in spring or root cuttings in late autumn.
Phlox may be affected by powdery mildew in dry weather which spoils the foliage, but can also suffer from phlox eelworm, a microscopic nematode that causes distortion of stems and leaves. The roots are unaffected by eelworm and so healthy plants can be raised from root cuttings.

An updated issue of the HPS booklet on Phlox (first published in 2001) is expected later this year.

Edwina Miller On 22.10.2020
Do you have access to this plant please? Reply to this comment
Margaret Stone On 29.01.2020
'Maude Stella Dagley' definitely comes from the late Terry Dagley. He was Vice-President of the Plant Heritage Worcestershire Group. The Group propagated the phlox for a Plant Fair, which is where Janet and Martin Blow, Special Perennials, obtained it. Reply to this comment
Showing 1 to 2 of 2 (1 Pages)