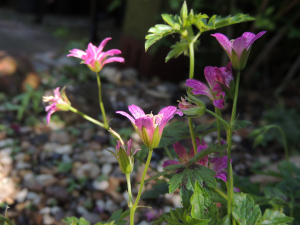 Geranium x oxonianum ‘Fran’s Star’ is doing well in my garden this summer, full of flowers and with lots of lush leaves. It must be all the rain we had earlier. It is a clump forming plant, but with long stems of small star-shaped pink flowers and mid-green leaves with brown markings. Flowers are supposedly semi-double, but only a few on my plant look like they have extra petals, giving the flowers a kind of scruffy appearance. It can be grown in either dappled shade or sun. Mine is planted in a very sunny site, which is why I think the darker markings on the leaves in my photos are a bit faint right now. Earlier in the year they were much more distinct.

The brown markings come from G. versicolor which is one of the parents of G. x oxonianums, the other being G. endressii. The two species do not normally occur in the same location in the wild, with G. endressii coming from Southern France & Northern Spain in the Pyrenees, and G. versicolor coming from further East in Southern Italy and the Balkans.

The two species were deliberately crossed at the John Innes Horticultural Institute in the 1920s and 1930s. One of the hybrids created was named G. x oxonianum ‘Claridge Druce’ by the curator of the University Botanic Garden in Oxford, and this appears to be the origin of the ‘oxonianum’ in the name of this group of geraniums.

‘Fran’s Star’ is the result of a cross that was made by Crûg Farm Plants. They took two different x oxonianum cultivars, G. ‘Southcombe Double’ and G. ‘Walter’s Gift’ and crossed them. It was named in memory of Fran Varley, who was the wife of the first Treasurer for the Worcestershire HPS group. It was Worcs HPS who introduced the plant to the Conservation Scheme in 2016. The plant is now grown by several local HPS Conservation groups, but still only 1 supplier can be found on an internet search.

Sally joined the Hardy Plant Society in the autumn of 2001, but only as a national member at first. She eventually joined the Essex group and was quickly co-opted onto the committee as Group Secretary. About the same time she also took on the job of Database Administrator for the Conservation Scheme. She worked with various co-ordinators on the scheme for several years, but by 2013 she needed to step down. Now retired, she continues to be the Essex Group Secretary, and divides her time between her small back garden and her allotment, which is where all those spare seedlings end up.