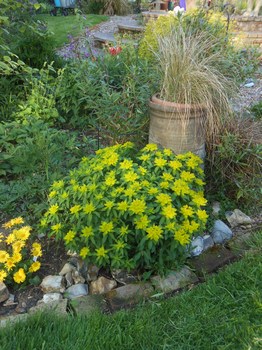 This unusual euphorbia was introduced to the Conservation Scheme in 2010 by HPS Norfolk & Suffolk Group and verified as the correct plant by Don Witton, National Collection holder of Hardy Euphorbias. It is seldom offered for sale and was last listed in the RHS Plant Finder in 2015.

Euphorbia fragifera Jan is an accepted name (theplantlist.org) and the plant was originally catalogued in 1818, collected by Georg (Giorgio) Jan (1791-1866) in Italy. Jan was an Austrian botanist of Hungarian descent who became professor of botany at Parma University.

A hardy perennial, E. fragifera has typical bright lime-yellow floral leaves from early May to the end of June, followed by seed formation, and it is the strawberry-red protuberances on the seed capsule that gives its specific name (fragaria = strawberry). It is closely related to E. epithymoides, but the annual stems become more woody at the base and the stem leaves are smaller.

Euphorbia fragifera is native to the Balkans, with its range just spilling over into Italy close to Trieste. Its habitat is the Balkan Karst, a limestone plateau, and finding out more about this area will help us to know what conditions it prefers in the garden.

I found a lovely description by Mr Edward Forbes, an English botanist, written in 1840; he says

"To anyone but a botanist, the Karst is a place to be avoided…. It is a table of bare limestone rock, a waste like no other; not a tree in sight, scarce a shrub or even a blade of grass to relieve the painful glare of the white shattered stones which strew the surface. Horrid however as the Karst thus appears to be to the ordinary traveller, to the botanist it is a paradise blooming with rare and beautiful flowers, for every crevice on its bare surface presents him with plants which grow nowhere else, and every little oasis in its barren desert is radiant with flowers of exquisite loveliness".

So this is a plant for the front of a sunny, well-drained border where it is not overshadowed by other plants. It can be propagated by soft tip cuttings as new growth emerges from the base of the clump during flowering. Cuttings need to be plunged quickly into a gritty compost to stem the flow of 'milky' sap and care needs to be taken as this can be a skin irritant.