Heuchera 'Burgundy Frost' is one of the older purple-leaved heucheras, believed to have been introduced by Dan Heims in 1986 and imported by the HPS (presumably by the Conservation Sub-Committee) to be entered into the RHS 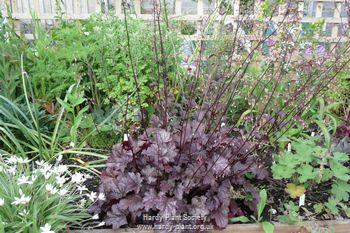 Heuchera Trials that ran from 1998-2001. It was awarded an AGM for foliage in 2000. This was subsequently rescinded when the RHS conducted a major review of AGM awards in 2012 (almost 1,900 plants lost their AGMs for reasons including little or no availability, those superseded by better plants, and for various other reasons). Heuchera 'Burgundy Frost' has been a Conservation Scheme plant since 2004 and has been successfully grown in most areas of the UK, although it is now listed by only 3 nurseries in the RHS Plant Finder.

Heuchera 'Burgundy Frost' is fully hardy, preferring good humus-rich soil which doesn't dry out although needs good drainage in winter. The lobed leaves which have deeply cut edges are greyish-red, marked with dark-grey veins and a purple reverse, and form a mound of foliage to a height and spread of 30cm. Sprays of small pale greenish flowers are held on stiff wiry stems above the leaves. It grows in sun or shade, flowering in June and July. Heuchera 'Burgundy Frost' is a good border plant, associating well with silver foliage and plants with plum-coloured flowers and also looks good when grown as a foliage plant in a pot.

Like all heucheras it has a tendency to become woody with the elongated stems lifting the crown out of the soil. The whole plant can be lifted, trimmed and replanted at a deeper level or individual stems can be detached and potted up when they root quite easily in a cold frame. This is best done in spring as plants start into growth.

There are over 50 species of heuchera, all found in North America and they were first introduced into the UK in 1882. Heucheras were named after Johann Heinrich von Heucher (1677-1746), a German professor of medicine and botany, by his friend Carl Linnaeus. 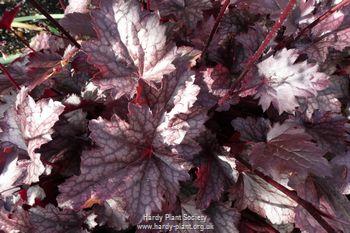 Heucheras were initially grown for the the cut-flower trade and Alan Bloom, one of the HPS founders and it's first president, introduced many lovely hybrids following his father's efforts. But it wasn't long before heucheras were being appreciated for their foliage. Dan Heim's Terra Nova Nurseries in Oregon ran a tissue culture breeding programme that produced large numbers of heucheras with different colour foliage from the 1990's onward.

The biggest threat to heucheras is vine weevil, the adult weevils disfigure the leaves, while the grubs eat away the underground stems. More recently heucheras have also been vulnerable to heuchera rust, caused by the fungus Puccinia heucherae. Leaves develop pustules on the underside, and the foliage turns dry and brown.The disease is spread by airborne spores, and attacks are worst during wet summers. All the leaves of an affected plant should be removed and disposed of (not composted) and new leaves usually grow back healthy or a fungicide may be used.

Brian Hackett On 08.08.2018
I have to confess I have failed with Burgundy Frost. It seemed ok for a while but I can't say it ever really thrived like other Heucheras I grow. I tried different situations and different composts, but it just didn't want to play. It has now entirely deceased! Happy try again though.. Brian Reply to this comment
Showing 1 to 1 of 1 (1 Pages)