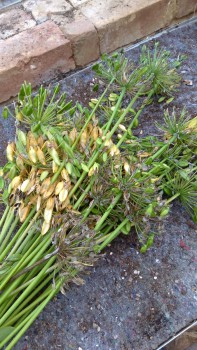 Deciduous Agapanthus plants are currently being cleared to tidy up the surface of pots. Stems with seed heads can be cut to place out and dry in a cool area such as a shed or utility area.

Seeds may not come true to type but could still yield some interesting variations.

After a 4-6 week drying off period I take two options.