It's just one of those personal targets! to get a task done in my last week at Hipping Hall before I start my new gardening position in early September.

My experience at plant propagation over  the years through research, learning from others, and my own hands on experience,  indicates certain plant material - woody, green, semi ripe, of many differing plant species produce higher or lower rooting potential depending on plant species, and  the time of year the cuttings are taken. 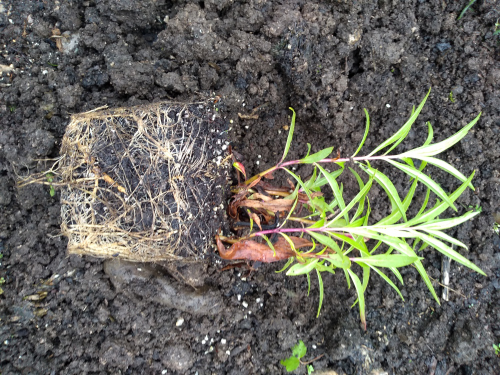 The image of the root structure signifies a good root initiation over the period of  approximately 8 months. These Penstemon were over wintered in the cool glasshouse and  positioned outside in early March. Ideally I would have planted these sooner but due to my position at Hipping Hall being Furloughed for nearly 14 weeks I was unable to do this. I selected an ideal space at the front of the large mixed perennial/shrub border in which to introduce the plants.

Planting the Penstemon now will still allow for a good two months flowering, with the addition of the sturdy root systems settling in the soil for the  autumn/ winter period, that starts now. We are working at two months ahead for continued flowering, and a four month period to allow the roots to still work within the particles of the soil before the soil temperature drops too much.

Timing is critical in order to get a head start for the next growing season. I have found that Penstemons adapt very well to this timed approach. These propagated plants will only require a lighter pruning  next spring in order to produce a surge of new growth. This is because they are not established plants and so in terms of their existing morphology, that will need a full seasons growing to produce a good formation  of lateral growths which these plants are renowned for.

My new Horticultural Plantspersons position will involve working with plants introduced within the Georgian period, and certainly with a focus from the last twenty years of that era linking in with the Victorian era. Penstemons were introduced in 1870, so at a push, I might just bend to introducing these wonders into the scheme of the planting recreation / development

Kevin Line On 10.09.2020
Hello Sheila, Good to hear from you, and thank you for your good luck message on my new role. I would take a chance at planting out the Penstemon cuttings in November if they are established at a height of approximately 20- 30cm. As a comparison it might also be interesting to trial results at placing some out into a cold frame and see how they fare, this compared also to keeping some in pots too in a cool or heated glasshouse, depending on your size and space. The plants outside will certainly love the free draining soil ! Reply to this comment
Sheila May On 07.09.2020
PS: Good luck with your new job! Reply to this comment
Sheila May On 07.09.2020
Hi Kevin, I have just taken penstemmon cuttings last week - I am hoping that this is close enought to your timescales for them to be as successful as yours. Based on your experience, if I plant rooted cuttings out by November would you expect they would cope with the winter ok or should I keep them in pots overwinter - they would be outside on my chalk hillside either way? Thanks Reply to this comment
Showing 1 to 3 of 3 (1 Pages)