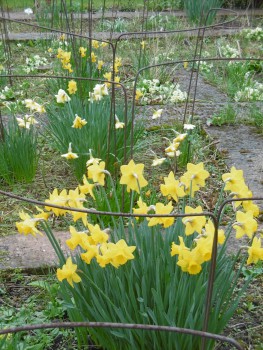 Early in March, the predominant flowers were hellebores and snowdrops but gradually daffodils took over from the snowdrops, although a few late varieties remained until the end. The photo shows daffodils in an area which will later be full of autumn asters. In the second half of the month, the trees gained a hint of green, which intensified after each warm day. There were a good number of those but also cold and wet spells, March winds and April showers sometimes coinciding. The dawn chorus became more pronounced and a pair of Mallards returned to the garden.

The blossom of shrubs and trees has been high impact. Cornus mas was in flower at the start of the month but finished before the end; it was succeeded by Forsythia. Prunus x subhirtella ‘Autumnalis Rosea’ is long-established but has never looked strong; perhaps because it is too near larger trees. The first I planted lasted a few years only so I tried again in a different position. Although a small tree, it looks good across the garden and draws the eye upwards. Prunus incisa ‘Kojo-no-mai’ is much shorter (~7’) but was densely packed with flower. On March 21st (the first day of spring), I noticed plums in flower in my front hedge; they are similar to damsons but the fruits are rounder and earlier. The true damsons flowered a few days later. I have had several branches removed from the front hedge because the trees are too tall and lean out too far over the common; they are also becoming brittle. More light now gets into the edge of the garden, where I am working on my latest borders. I am planting evergreen shrubs inside the fence to slowly replace the hedge but I shall leave a few of the plums. Further along that boundary is an unnamed chaenomeles, which was in the garden when I moved in and is about fifty years old. On the opposite bank, primroses I planted long ago are now self-seeding satisfactorily.

Primroses also flourish within the garden and, although P. vulgaris is the most prolific, I add new varieties most years. I like the recently bred dark-leaved cultivars from Joe Kennedy in Ireland, including ‘Drumcliffe’ and soft yellow ‘Claddagh’. Cowslips (P. veris) seed around freely and are tall enough to make good cut flowers but oxlips (P. elatior) have not spread as quickly and I cherish the small colonies I have. Primula denticulata have been less successful but I am pleased that one clump has survived and is flowering; perhaps I have given it a sufficiently damp spot this time.

Cathy Rollinson On 03.04.2017
Beautiful images, Margaret It's amazing how quickly the picture changes in the garden at this time of year. Reply to this comment
Margaret Stone On 04.04.2017
Thank you. It was good to see you at HPS Primrose Day; a really excellent day at which I learned a lot.
Showing 1 to 1 of 1 (1 Pages)