Early in August the white Leucanthemums were mainly replaced by yellow flowers with touches of orange and red, which increased as the month progressed. (Leucanthemum x superbum ‘Goldfinch’ flowers longer.) I have old reliable clumps of Achillea filipendulina ‘Cloth of Gold’ and Rudbeckia laciniata ‘Hortensia’, which perform each year. Both are tall and need staking but are otherwise trouble-free and excellent cut-flowers. Lysimachia punctata and Inula hookeri are vigorous spreaders but I would not be without them; particularly fascinating is the way buds of the latter open in spirals. Rudbeckia fulgida var. sullivantii ‘Goldsturm’ is a favourite front of the border plant but needs moisture, the flowering stems dying quickly if short of water. 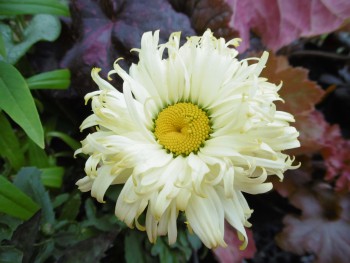 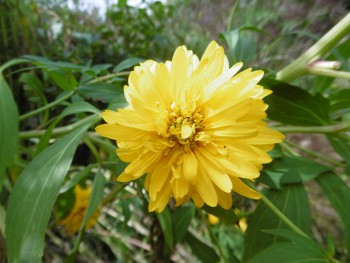 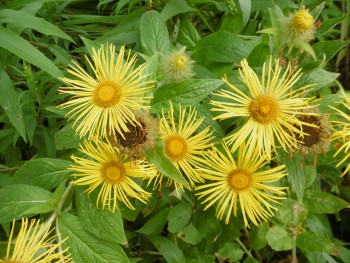 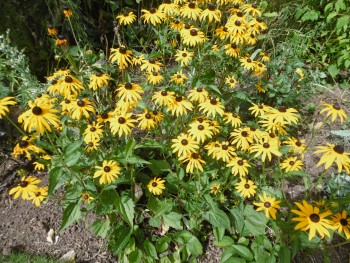 I have a large number of plants in pots, which need frequent watering, as do the vegetables, but I do not usually water the borders unless they have been recently planted . However, at the beginning of August I noticed a rhododendron with wilted leaves and realised that there was a problem: it was growing beneath trees and the ground was very dry. Watering soon revived it but there were so many plants to look after! The drought continued, the ground cracking and even trees looking stressed. The leaves on a silver birch turned prematurely yellow. Rain did not come until the 19th. It then fell fairly steadily for two days but there were some high winds and heavy showers, which brought the dead leaves out of the trees – the silver birch was left with almost bare branches.

Heleniums are good August flowers; I admire them (particularly the dark red ones) and have planted many but none remain. My longest-lived was a clump of ‘Moerheim Beauty’ but more recently I have found that they do not last more than two or three years and frequently do not overwinter. Sadly, the yellow, orange and red echinaceas do not overwinter either, nor do the Echinacea x Rudbeckia ‘Berlin’, ‘Dublin’ and ‘Peking’. I lost the last group in the 2014-15 winter so tried again in spring 2015; they formed excellent plants, flowering all summer. Determined not to lose them again, I potted them up and kept them in a cool greenhouse but they still died. I am not sure why I lost them in pots but it is probable that the losses in the ground are due to our warm, wet winters. North American plants are suited to snow-cover, which protects them and gives a long season of dormancy. In Worcestershire, the plants are exposed to heavy rain and hard frosts; drainage is often poor and warm spells can cause early growth which is then frosted.

I do have success with crocosmias. I find the much-maligned common montbretia, Crocosmia x crocosmiflora, attractive but it does need regular division to maintain a good ratio of flower to foliage and is too vigorous for many gardens. Many of my cultivars have been undisturbed for ten years or more and still flower profusely. Unfortunately, I have found that the best large-flowered varieties, such as orange ‘Star of the East’ and tomato-red ‘Mrs. Geoffrey Howard’ do not multiply quickly or form strong clumps here. Far more vigorous are bright orange-red Bressingham Beacon, x crocosmiflora ‘Carmin Brilliant’ and peachy-orange ‘Okavango’. The recommended time to divide them is in spring but there is so much to do then that I rarely get time to propagate the crocosmias! 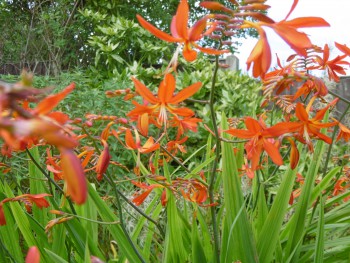 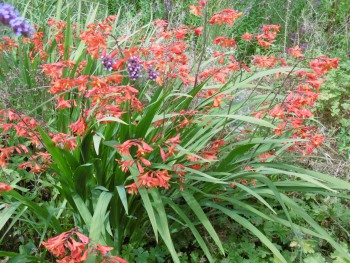 I have experimented with agastaches recently. I think some were planted in soil that was too heavy because they did not overwinter. However, Agastache ‘Orange Nectar’, planted last year in a better-drained area, has survived and flourished; it has been flowering all summer and improves each month. In an area that tends to waterlogging, I planted Eupatorium maculatum Atropurpureum Group ‘Riesenschirm’ two years ago. It made a magnificent clump last year and has repeated the performance. It is tall but does not take up a lot of ground area so would be suitable for all sizes of garden; it does not need staking. 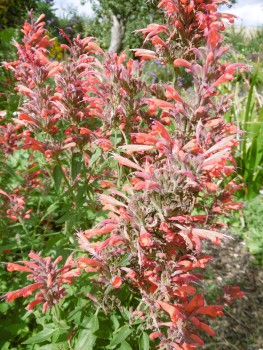 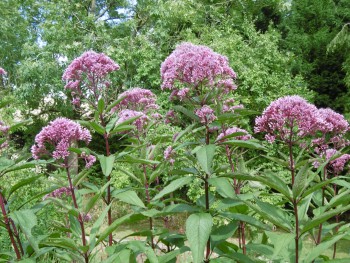 There has been a mountain of growth to cut back in August: perennials that have finished flowering and overgrown shrubs. Cutting back also reveals weeds lurking below! I can certainly see where I have been and the late-summer flowers look much better for it. I have not managed to get around all the borders yet but the task is, as ever, urgent. Compost bins are overflowing and that means emptying rotted compost into sacks because I am not ready to use it yet. The recent rain has made the ground wet enough for mulching in areas where there is space between plants – mainly my new shade borders. When I get the opportunity, I have lots of planting to do: there is always something to plan and look forward to.