Last Month in My Garden, September 2016 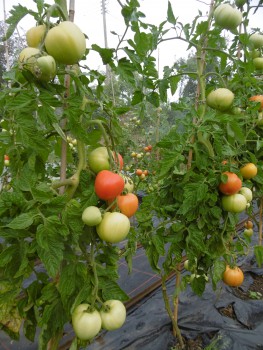 September – mists and mellow fruitfulness. There have been evenings when mist has formed on the Old Hills common and rolled down towards my house; in the first part of the month they soon burned off the next morning, leaving some glorious late summer days. Harvesting has been time-consuming: daily picking runner beans, courgettes and a bumper crop of tomatoes. I grow about forty tomato plants outside each year, in six or seven varieties. The most consistent producer has been blight-resistant ‘Ferline’. In wet years, when blight has been significant, the plants have been resistant, although not immune. This year blight is not a problem but ‘Ferline’ has excelled in the size and quality of the fruit. Autumn raspberries flagged in the August drought but are now back to normal; if you want fruit for dessert, rather than jam, these are more useful than the summer varieties because they yield smaller quantities over a long time (three months) but the flavour is not quite as ‘tangy’. For the first time in many years, my ‘Conference’ pear has had few fruits (frost at flowering time?) and, most disappointing, they have all rotted. The ‘Bramley’ seems to have gone biennial-bearing and this is an ‘off’ year; I shall have to make a greater effort to thin fruits next year. ‘James Grieve’ is the first apple I pick; although the crop was not large, the quality was excellent and other dessert apples were similar.

Michaelmas Day is September 29th and is usually the beginning of the peak flowering season for my Michaelmas daisies. However, many varieties flower earlier. Aster trifoliatus subsp. ageratoides ‘Asran’ began in late August but usually starts in July. It continues into October and, although not the most showy, makes useful blocks of colour and is reliable. The pale mauve flowers have bright lemon-yellow centres and come on stiff stems which do not need staking; it is approximately 70 cm tall. Growing in an open border, it does spread but not rapidly. I tried some plants in dry shade (under a conifer); they made little progress in the first year but have since done well. They are not as vigorous as those grown in better conditions but I am really pleased to have something attractive in such a difficult position. 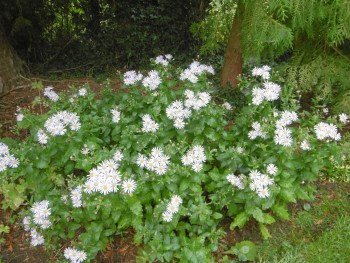 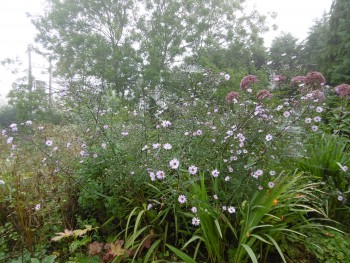 Symphyotrichum laeve ‘Les Moutiers’ began to flower mid-month. This was found by Hardy Planter Olive Mason in France. It has fairly small flowers (2 cm diameter), in mauve and pink, on dark airy stems up to 1.5 m tall (but this year 1.1 m) and clumps up vigorously. Both asters are good cut flowers and sufficiently prolific that they can be used as ‘fillers’ in bunches. I have a collection of Symphyotrichum novae-angliae and ‘Evensong’ started flowering seriously at the beginning of September, long before the others; it was finished by the month end. 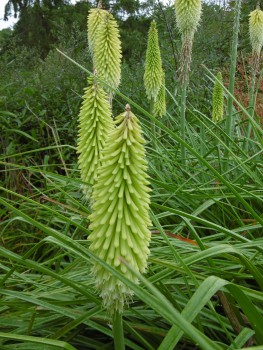 Some of the best plants in the garden started flowering in July, e.g. Crocosmia Bressingham Beacon and Rudbeckia fulgida var. sullivantii ‘Goldsturm’. I visited Bressingham Gardens early in September and they had glorious clumps of the rudbeckia there, with drifts of agapanthus. I also grow long-flowering Kniphofia ‘Percy’s Pride’, which commemorates Alan Bloom’s propagator; my clump is old and reliable with a constant supply of flowers. Kniphofia ‘Erecta’ is an unusual form with upward-facing flowers which came to me from Bressingham more recently and seems to be doing well. Other plants did not begin to flower until September: solidagos and sedums. The flowering evolves steadily and, with the weather, shows that summer turns inevitably to autumn. 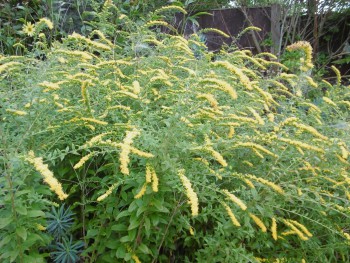 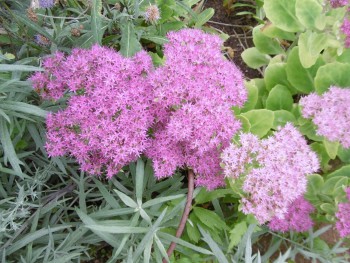