Last Month in My Garden, October 2016

A burst of autumn glory and dry, mild weather to enjoy it. Colour has come from three main sources: clouds of symphyotrichum (asters), jewel-like dahlias and the dying foliage of trees and shrubs.

The asters which were flowering in September continued and were joined by others so that large clumps of mauve and pale blue developed. Being at the UV end of the spectrum, the flowers are bright and show up well in autumn light.  White flowers also stand out; one pleasing combination is Symphyotrichum ericoides ‘Vimmer’s Delight’ with S. ericoides f. prostratum ‘Snow Flurry’ (both with very small flowers) and self-sown Erigeron annuus.  Some of my clumps need to be divided; S. laeve white-flowered is far too large a clump but looks magnificent from mid-October into November. 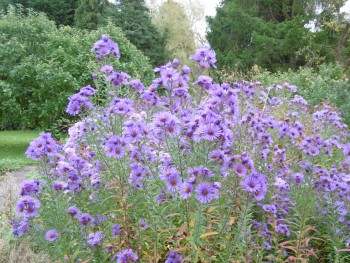 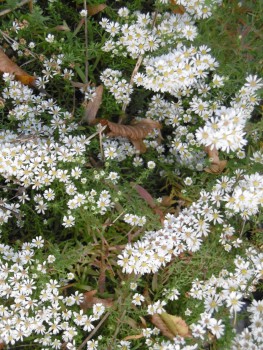 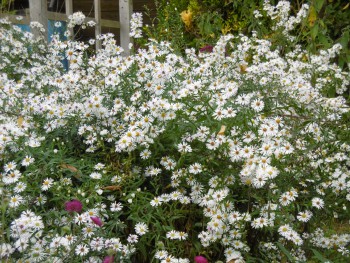 My dahlias were slow to flower this year but, without any frost, have put on an excellent late show, the plants steadily increasing in size and number of flowers. ‘Murdoch’ has made the clump with most impact – an eye-catching red in the centre of the garden; I can see it from the house. Although I am enthusiastic about dark-leaved plants, the red flowers seem to stand out well when the green leaves merge with the surrounding foliage. Dahlias often grow “rogue” petals but the strangest plant I have is ‘York and Lancaster’; flowers vary from almost all-red to all-white. It is an old variety, although its history seems uncertain (introduced 1915 or 1850?). 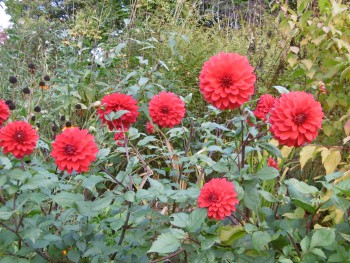 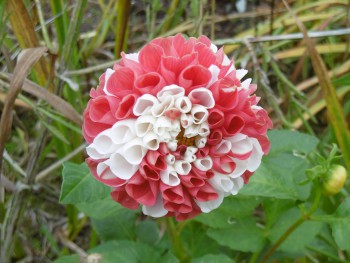 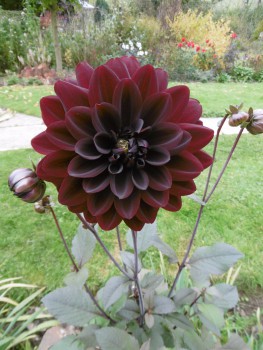 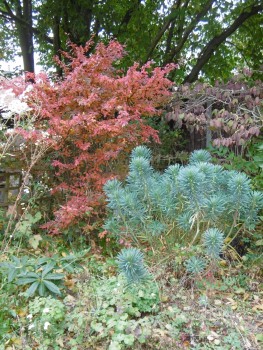 Leaf colours changed throughout the month. Two large ash trees turned lime-yellow and then began to slowly shed leaves, signalling the start of leaf-collecting. Some of the leaves in the garden are collected when the grass is mowed but others are collected separately and binned to make leaf-mould, which I use for potting and selective mulching. They are usually left for two years or more before use. Sometimes I do not get around to gathering all the leaves so that they rot in situ; however, I prefer to clear them and tidy/weed the beds before mulching. I stare at the ash trees critically from time to time but, fortunately, have seen no sign of disease. It is an excellent year for leaf-colour and flowering shrubs are having a second season of interest. 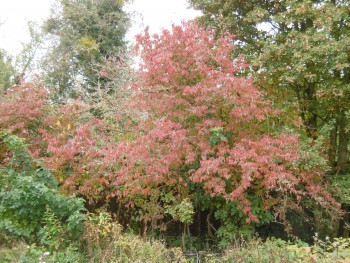 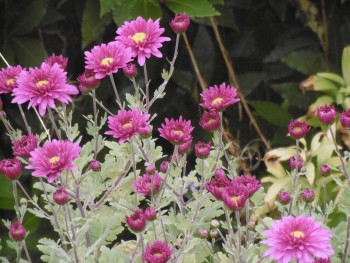 In the last week of the month, most of the hardy chrysanthemums showed colour and promise of flowers to come; exceptions were ‘Golddukaten’ and ‘Bretforton Road’. The first flowered all month: small yellow flowers with a bronze centre which turned all-over yellow. It is a cheerful plant which I acquired this year from the Plant Heritage Plant Exchange. ‘Bretforton Road’ (from Bob Brown) is an established clump which came into flower mid- October and is looking really good. The forecast for early November is more dry, bright weather; I do hope it is correct.