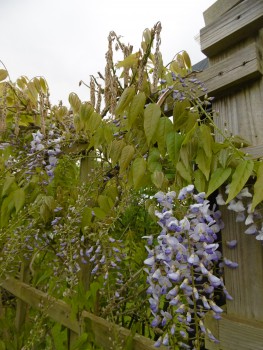 On May 1st, buds on the ash trees were just breaking but my oak tree was in leaf. According to the rhyme “Ash before oak, in for a soak; oak before ash, only a splash”, this meant that we were to have a dry summer. In fact, the garden was enjoying the first good rain for weeks. The rain triggered accelerated growth and soon everything appeared taller and wider, the borders more blowsy and lush. During the first two weeks of the month I came upon the results of a frost we had had in the last week of April. Fellow gardeners reported damage (hydrangeas in particular) and I gradually realised that plants I thought suffering from drought were, in fact, frosted (e.g. Corydalis temulifolia ‘Chocolate Stars’). As the wisteria buds swelled, damage to the more exposed flower-trusses could be clearly seen. Night temperatures were low but we just avoided further frosts. By the third week of the month we were experiencing a heat-wave, with temperatures in the high 20s, which were too high for me to do all I needed to.

The season of white flowers continued from April, mainly provided by shrubs.

Oriental poppies opened, standing out prominently in the sea of new green foliage.

Iris sibirica also provided good spots of colour, although in one bed the plants were only half the usual height. Possibly, this was because of drought but I have never known it happen before. The plants affected are an old planting (25-30 years) and I hope it is not a bad sign. Some people advocate splitting clumps every three years but I have left them undisturbed and enjoyed excellent results. When I have needed to dig up a clump, I have found it very difficult and splitting clumps is worse! Some of my early plantings are white-flowered and grown from seed; I do not have many named varieties and have lost a few that I tried over the years but all those added in the last decade have been successful so I should add more.

Hesperis matronalis (Sweet Rocket, Dame’s Violet) has been flowering in large drifts, adding to the white theme. A few mauve-flowered plants have appeared, although I have never planted a mauve form, wanting to keep my stock pure. The genes may have come in with some variegated plants which, sadly, have not seeded variegated (although a variegated plant has flourished for two years in the vegetable patch!). Foxgloves self-seed reliably and, for the first year, have been joined by thalictrum and astrantias. There are a number of named astrantias in the garden and their seedlings are good quality but often place themselves at the very edge of a path, which is not ideal. Presumably, the edge of the border is a good place for germination because there is moisture there and little competition; however, this leads to many weeds and good plants which have to be removed because people need to walk down the path!