Last Month in My Garden, January 2018

The first daffodil of the season opened on New Year’s Eve and it has been joined by others so I have had an increasing number of cheerful blooms throughout January. I have grown Narcissus ‘Rijnveld’s Early Sensation’ for a few years and the clumps are now established but N. ‘Spring Dawn’ is new this year; it has a much paler perianth. They can be seen across the garden (particularly where I have tidied borders) and I really appreciate these early flowers. It is an early snowdrop season so there has been plenty to draw me outside. I enjoy looking for newly-opened varieties and am pleased when I find the clumps increasing in size and impact.

As usual, shrubs have been making an important contribution to the winter garden. Hamamelis mollis var. pallida has been flowering all month but has not looked as good as it should because dead leaves have stayed on. They do not pull off easily but have to be cut; I removed a few but soon realised that I did not have the patience to do them all! Anisodontea ‘El Royo’ flowers for most of the year, January included. It looks quite exotic at this time of year.

I have just added another red-stemmed cornus: Cornus alba BATON ROUGE. It is a strong red but not as outstanding as Cornus sanguinea ‘Anny’s Winter Orange’. However, the latter likes a sunny position with fairly good drainage and I am hoping that the new plant will be more tolerant of a damper spot. Another new addition is Sarcococca hookeriana WINTER GEM. Sarcococcas have been persistent here and I need evergreens; I am also hoping for more of those warm days when the scent mingles with that of shrubby loniceras and wafts across the garden. Sarcococcas do best in shade (the foliage is darker and healthier); although plants in the shade do not release as much perfume as those in sun, they do give a pleasant surprise if I am working nearby.

While working under a small whitebeam tree, Sorbus aria ‘Lutescens’, recently I was struck by the lichen on the trunk. There was a mature specimen of this tree in the garden when I moved here but it was destroyed in a gale one Christmas (falling onto the garage roof!); its main attraction had been the newly opened spring leaves. There was also a bramley at the back of the house but, after ~ 20 years, it was necessary to remove that because I had not coped with the pruning: it had grown too large and apples were falling on one area of house tiles, breaking them. The previous owners had not thought of the future when planting it so near the house. When it was removed, it was replaced by the new sorbus (planted further from the house) and I had new planting areas. 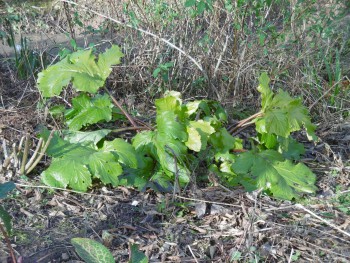 The last month has brought plant surprises. Acanthus mollis ‘Hollard’s Gold’ is too often destroyed by cold but this winter it is still looking good. I assume it is because, when the worst frosts came (in December), it was safe under a thick blanket of snow. I hope that there will be no more harsh weather.