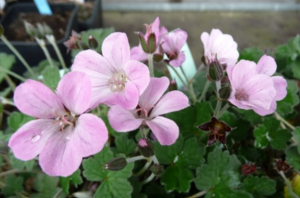 Spring is a time for dividing plants and making new ones. That’s exactly what I’ve done this week with my Geranium ‘Pink Delight’.

I kept it in its pot last year so I could trial it in different parts of the garden. Eventually I decided it belonged at the base of an arching trellis where I have planted a climbing rose. It gets sun there most of the day, and because I keep the rose well watered, plenty of moisture too.

Looking a little scruffy after the winter weather, I started by dumping the pot into a seed tray to get a good look at the plant.

I could see that it had several growing points which would divide easily to form new plants. I began by breaking these apart, first into 3 sections.

One of these sections had two prominent growing points going in opposite directions. I decided to try splitting these to make two plants. That was harder than it looked, and the woody base stem was longer than I expected.

This gave me 4 pieces to pot up, but as I began to pot up one of the pieces with the cut stem, I began to have second thoughts. It was such a long cut and so exposed I wondered if it would get diseased if buried in soil. In the end I wasn’t brave enough to do it. I broke off the two individual ‘arms’ and potted them separately.

I potted all these sections up into a fairly gritty mix of John Innes 2 and peat free multi-purpose compost to which I added some fine grit and vermiculite. When my job was complete I had 5 pots ready to grow on.

The first pot had several growing points and was planted with a nice clump of the old roots and soil still attached. The second pot was the smallest piece with 2 tiny growing points and only a few leaves. This is probably too small, but it broke off on its own so I thought I might as well give it a pot and see what happens.

The other three pots were from the section I cut with my knife. Perhaps I should have kept one of the cut sections to see how it did, but instead I potted them up as shorter pieces.

I will keep the largest section to eventually plant out in my back garden. The other 4 pots will go back into the Conservation Scheme (assuming they all grow!) so that new growers have a chance to enjoy this lovely little geranium.

Introduced into the Scheme in 2015, Geranium ‘Pink Delight’ has been a Feature plant twice before. If you want to know more about it and how it came into the scheme see the articles for November 2015 and July 2018.

Sally joined the Hardy Plant Society in the autumn of 2001, but only as a national member at first. She eventually joined the Essex group and was quickly co-opted onto the committee as Group Secretary. About the same time she also took on the job of Database Administrator for the Conservation Scheme. She worked with various co-ordinators on the scheme for several years, but by 2013 she needed to step down. Now retired, she continues to be the Essex Group Secretary, and divides her time between her small back garden and her allotment, which is where all those spare seedlings end up.

0 Comments To "May 2021 Conservation Feature"