We are sorry to say that the National Annual Lecture Day and AGM will not take place on 25 September 2021 as planned. We will let you know in the July edition of the HPS newsletter the arrangements for a virtual AGM instead. 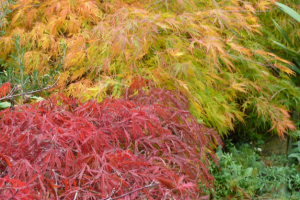 Over the months that elapsed from moving the plants in the original hospital bed to create the courtyard until we created the gravel garden, a new idea emerged. 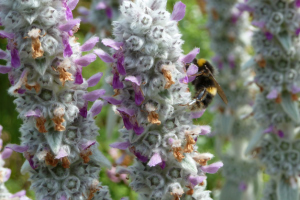 In the 80’s I assisted an ecology/botany graduate friend of mine to lead a botanical/walking holiday in the Plakias area of Crete in the spring to see and identify the spring flowers.  We were not at or on beach level, but walking through the foothills above the beaches (where all the original villages were), and enjoying the beautiful Maquis environment. 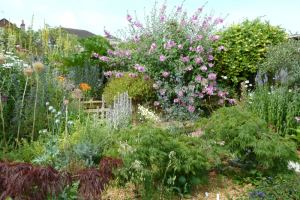 The new garden area needed to provide some interest all year, but be a follow on from the Rose garden nearer the house which peaked in June, so that sitting on the courtyard in high summer you had a beautiful view up the garden.

Most holidays to various Greek Islands in the 90s in particular were during September and October, and we always encountered Fig trees clinging to cliff tops or beside the roads smothered in ripe and juicy figs which were a delight to pick and eat sun-warmed from the tree.  We determined we were going to have one ourselves. 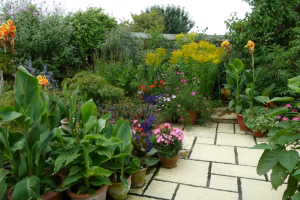 What does the term Mediterranean Courtyard evoke in your minds’ eye?  Is it something like one from Portmerion Village in Wales?
Or perhaps one or two ideas from within the Temperate Biome at the Eden Project? 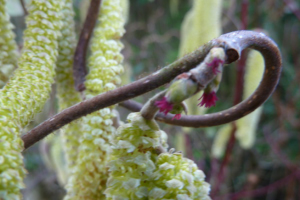 Jerusalem artichokes (Helianthus tuberosus) are members of the sunflower family, and in this garden behave like any hardy perennial, dying back in the winter from their statuesque stems up to 3 meters tall with their tubers sprouting again in March/April.  They have lovely flowers like sunflowers too.  You can grow them as a wind break in the garden to protect more delicate plants. 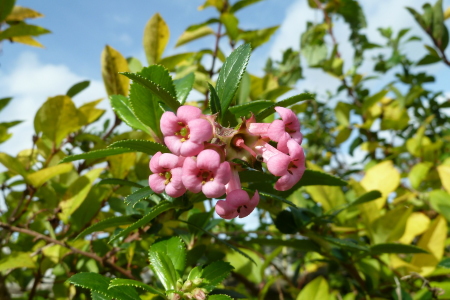 Like most gardeners I almost never sit in my garden relaxing - we rest on various benches during our labours for a cup of tea or coffee for a short time, seeing all that needs doing.   Consequently I wanted something to look at all through the year as well as scent and colour. 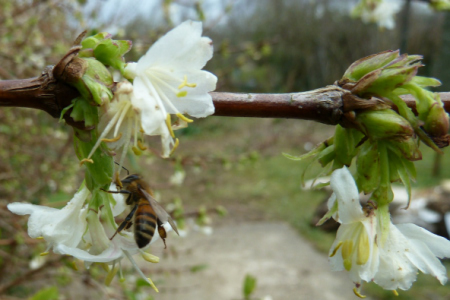 Generally each year I have two or three concerted efforts to cut back or pull out the brambles down the boundaries, once in the winter, again in later spring, and hopefully during the summer as well, which creates cuttings material (ie the honeysuckles branches snap off as I pull out the brambles) but does not eradicate the brambles, which are growing in and through the roots of the other shrubs and climbers. 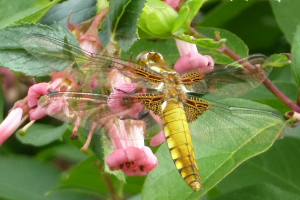 I may have mentioned in my earlier pieces about creating the pond how certain plants overwhelm the space allotted (and indeed every other space) and have to be removed completely – I’m thinking Typha minima here particularly – but it is staggering to me how vigorous waterplants are in their growth when you think they are either freefloating in just water, or anchored into very very poor soil in the margins. When we created the terrace for the pond, you may remember we also created a space down one side that was to be the bog garden, with a separate Gunnera manicata bed below it, but attached.