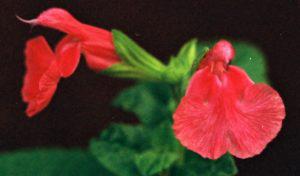 In the first chapter about  the salvias  I told the story how I became hooked to them and this time I would like to introduce you to all of ‘my’ Rodbaston ones, of which I am extremely proud!
There are 6 'survivors' of the original 7 which is much better than I had hoped a few months ago.
Fortunately for me was that the  owners and present Head Gardener of Wollerton Old Hall had still kept the varieties after they got them from me for the RHS trials from 2012-2014  of what I call the 'Shrubby salvias' (Salvia microphylla, S. greggii, S. x jamensis and varieties + cultivars/hybrids).
They never become like real shrubs though and could be classified more as a half-shrub. But more about this later in how to look after your salvias.
The remaining 6 Salvias are: 'Rodbaston Red'; 'Rodbaston Rosy Cheeks';  'Rodbaston Breeze'; 'Rodbaston Tough Beet';  Rodbaston Dainty Purple' and finally 'Rodbaston Currant Purple'.
The first 2 are both vigorous plants up to 4' or even 5' (1.20 - 1.50 metre) if you let them and against a sunny wall or squeezed in between other plants so having to grow out into the light; but this is not recommended! They have rough, ovate to roundish, fragrant leaves which are typical of much of the microphylla varietes.
All the other cultivars are more difficult to classify into species and are probably wild crosses and varieties of greggii, lycioides, serpyphylla with possibly microphylla as well! It might only be able to find out by their DNA and by knowing where the original plant was found and which 'parents' grew close by! Most of the Rodbaston varieties had CDR numbers which are still in the original  database somewhere in storage. Hopefully when we live somewhere permanent I can retrieve those.
The first I re-named to the present 'Rodbaston Red' used to be 'Kew Red' until James Compton, who came as the main guest speaker to the College's Salvia Study Day, told me this was wrong and he suggested the present name to me. 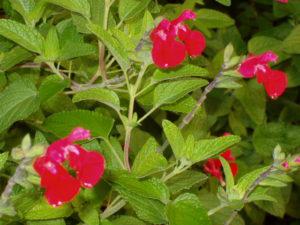 Salvia 'Rodbaston Red'
This salvia is still probably my most used salvia in private gardens, due to it being a vigorous and tough plant here in the West Midlands. It flowers with its bright red flowers from May till frost and the fragrance of the foliage is a much appreciated extra bonus! It remains pleasantly fragrant when dried so I can recommend this one for pot pourri! They do use microphylla varieties for herbal tea in Mexico, called ‘Mirot de Montes’ and as a medicinal plant against fevers.  (https://pfaf.org/user/Plant.aspx?LatinName=Salvia+microphylla )

'Rodbaston Rosy Cheeks' was named by me as the oval to roundish leaves used to get a pink blush for which the reason I do not know. See on picture right. But also as I thought it was a nice name and the flowers are slightly more pink than red. It grows very upright. 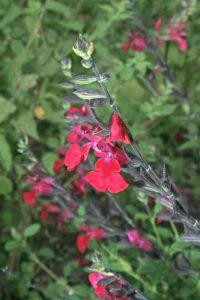 'Rodbaston Tough Beet' (above) has dark beetroot coloured flowers which stand well above the main plant. It also has rather narrow leaves. The 'tough' part came about in one cold winter with -18 C. recorded on one night which it survived no problem! 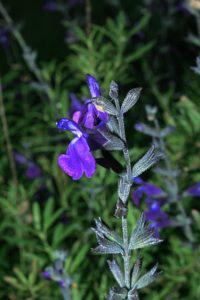 'Rodbaston Breeze' has a very different colour flower in that it goes more towards the violet-blue of the spectrum instead of red-maroon as many of the other varieties! This indicates probably that it is crossed with Salvia lycioides, which apparently has true, bright blue flowers, although this can only be found out by DNA or knowing its wild origins and the possible parents growing it its vicinity! Whilst botanizing in Mexico we found many ranging colours in several other species of Salvia.
There are a lot of wrongly named Salvia lycioides plants in the circulation but nurseryman William Dyson in Kent has got the real thing! 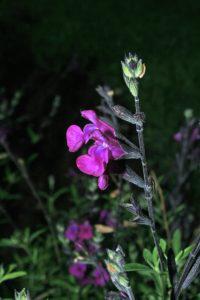 The next one is called 'Rodbaston Dainty Purple'.
This may well be a hybrid with Salvia serpyllyfolia because of a similar habitat as well as the colour of the flower.
It is very sprawly and delicate looking with the flowers well above the narrow, glossy leaves. Hence the name... 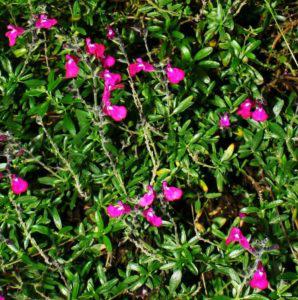 The last one is 'Rodbaston Currant Purple'.
Unfortunately I cannot find a good close-up of the flower. The distinctive feature in the purple-pink flower is that it has a white centre.
The leaves are glossy and more oval in shape so possibly one parent could be Salvia greggii or again S. serpyllifolia? We will probably never know unless we will find the original collection place of this plant. I will try and find out; watch this space! The leaves have a distinct blackcurrant smell, which is one of the diagnostic features of S. microphylla. One of its common names is Blackcurrent Sage!

Yoke started her Yoke’s Magic Gardening business in April 2012. She has also recently (January, 2019) started growing a very colourful plant called the Salvia again, of which she used to have a National Collection at former Rodbaston College in Staffordshire.