These pages recognise the significant contribution made by members to the Hardy Plant Society at a national level.

Entries are authorised by the Chairman or Hon. Sec. 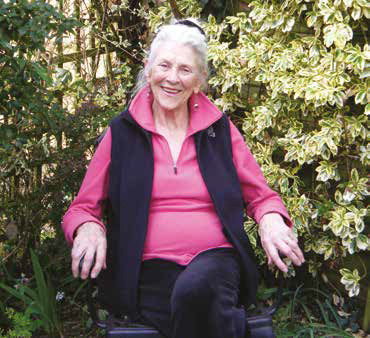 Once, twice, three times a lady, as the song goes! For her three years as HPS Chairman (1987–1990) it was always a joy to see this tall, slim, elegant lady. In spite of her increasing deafness, Gwladys’ humour and gentle manner allowed her to advise, guide and achieve much for the Society.

It was during her period in office that this Journal was first published in colour. Her forward thinking meant that several new Groups were formed, a policy which we have continued to follow over the past decade. On retirement as Chairman it was fitting that she became a Vice- President of the Society.

Gwladys was a gifted lady: she received several Gold Medals at the RHS shows for her paintings of flowers; she was an excellent photographer; and she was a splendid speaker, and spoke to all newly formed groups at their inaugural meetings. Indeed, she formed her own local Group – Bucks, Northants and Oxon – and served on the committee for several years, later becoming a life member.

A Gardener’s Progress (1974), is based on her practical experience in creating a new garden. The advice is down-to-earth and still relevant today. The book appeals because it reflects some of our frustrations as hardy planters, as well as possible achievements.

One has to admire Gwladys, for after her retirement as Chairman she continued with further education, taking university courses and passing them all with distinction – quite something for a lady of her age! She also enjoyed and continued to support the HPS by attending Autumn Weekends, garden visits and many other specialist plant meetings.

By 2002 she was profoundly deaf but had already learnt to lip-read. She took up computer classes, which she found exhilarating, for she could carry on conversations with people on the net. Owing to deafness she hadn’t attended meetings for some years, but she welcomed members to her garden, several going to see the snowdrops in 2016 when she was 95. Her garden was quite small but absolutely packed with plants, and there were pots everywhere. She had a route laid out for visitors, primarily to prevent them stepping on precious plants!

Her humour was refreshing, summed up in a statement made in 2002. “I feel years younger than I look or, to put it another way, I look years older than I feel! The first way seems more positive.”

We remember Gwladys with great affection and shall miss this lady, her knowledge, her smiling face and happy countenance. 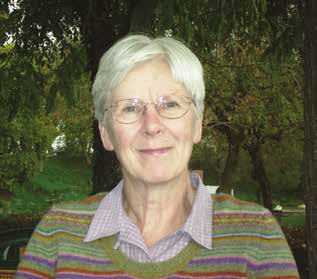 Shropshire Group and the wider Hardy Plant Society were shocked and saddened to learn of the sudden, unexpected death of Pauline Cooper on 8th January.

Pauline joined the HPS and the Shropshire Group (SHPS) in 2001 after retiring from her business designing children’s theatre costumes. She quickly became known for her enthusiasm and commitment, and for several years organised the Group’s Plant Fair, served on the Committee and later became Group Chairman. Pauline and her husband Derek organised the Group’s celebration of the Society’s 50th anniversary at Arley Hall in 2007 and were pathfinders for summer garden visits. Latterly Pauline also coordinated one of SHPS mini groups – informal groups in different parts of the county who meet together to visit gardens in their locality.

Pauline is best known nationally for her role as the Seed Distribution Coordinator, a position she took up in 2014. The Distribution dates back many years, run originally by a husband-andwife team, then by a paid manager, eventually evolving into a volunteer-only scheme dispersed over several areas of the country.

Pauline’s most significant contribution to the Society has been organising the Distribution with around 80 volunteers while moving towards exploiting the power of the internet to deliver one of the Society’s charitable objectives. This role demands both sound horticultural knowledge and excellent organisational skills, and Pauline’s passion for growing plants from seed and pursuing the correct nomenclature, her proficiency and enthusiasm have made the Scheme the success it is today.

It may surprise some members to learn that the HPS Seed Distribution (with typically 2000 varieties) is some 10 times larger than that of the RHS, that we generally have several varieties in our list which are not in Plant Finder, and that Pauline mailed our seed to about 20 different countries!

Pauline kept her light under a bushel. She had worked in information gathering for Carl Sagan, populariser of science; she had various roles both locally and nationally with Save the Children; her design skills were such that some of her theatre costumes appeared at a birthday party of one of the royal princesses; and at one time she was an Elder at the Stoke Quaker meeting. In everything she did, her contribution can be well summarised by a nautical metaphor: she had a good and clear sense of direction coupled with a gentle hand on the tiller.

Pauline enriched the life of the Society and will be sadly missed by her local Group and the entire HPS community. We have lost a good friend.

Our sincere condolences and deepest sympathy go to Derek and her family.