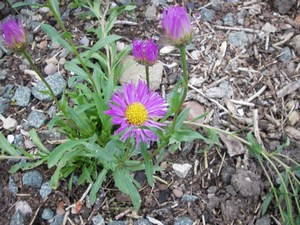 I have grown Erigeron “Sincerity” for approximately ten years but it was a few years before I really took notice of its charms. The daisy flowers are a pinky/blue with a yellow centre and they first appear in June and then it flowers continuously until late November or even into December. The photo with the red foliage of Geranium sanguineum alongside was taken in early November. What an achievement – six months of flower power! Its only fault is that it is a bit of a flopper. It is about 60cms to 70cmsin spread and should be a similar height, so please allow it some space. I haven’t bothered to stake but allow it to sprawl down a bank.

When a flowering stem is spent, cut it back close to the crown and new stems will quickly appear. In mid-spring cut back all spent stems back to the crown. It prefers a well-drained soil, mine is in neutral clay which dries out considerably in summer (except for 2012) and surviving the cold winters of the last couple of years without any problem, lowest temperature was -18C.

It was originally introduced by Alan Bloom, one of the founding fathers of the HPS who was the society’s president for many years and this plant is a wonderful tribute to him.