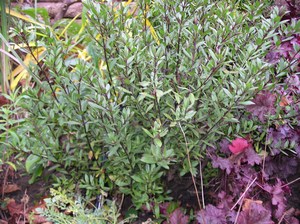 Hebe ‘Nantyderry’ is delightful little shrub which has proved to be very hardy in the North-West of the UK and survived temperatures as low as -18o. It is grown in well-drained soil that dries out in summer but drought doesn’t seem to bother it, nor the excessive wet conditions of this last year. The leaves are small and evergreen with purple stems, the purple spreading into the lower half of the mid-rib of the leaf. The foliage may turn purple during the winter. It grows between 75-80cms tall with a similar spread. After five or six years it did become a little leggy, due more to being overshadowed by surrounding plants. It was pruned back down to 30cms in June and by December it was back to its original size. The flower spikes are 3cms long, violet fading to white as they age and once flowering finishes it is better to give the plant a light trim to remove the dead flowers.

This plant has been propagated from cuttings in late spring as well as by layering a leggy stem with a large stone. The layering technique is to find a suitable long stem, wound it slightly with a sharp knife to remove a very small piece of the outer bark on the underside where the stem would touch the soil, make a depression in the soil and bend the stem into the hole and then cover the stem at this point with nice fine soil and then place a stone over the buried stem. Sometimes it is a good idea to place a cane alongside and tie the upright stem to the cane to give it some support and to prevent the stem from moving beneath the stone. Leave in place for at least twelve months and then when it has rooted, sever the stem from the main plant, dig the rooted cutting up and pot up or replant elsewhere in the garden.

Hebe ‘Nantyderry’ is a lovely low maintenance plant which should be more widely grown and as such is an ideal candidate for the HPS Conservation Scheme.