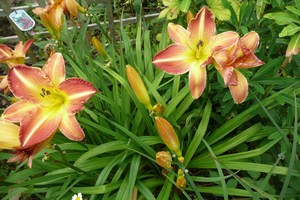 This daylily was rescued from the late Jane Sterndale-Bennett’s White Windows garden in Hampshire. Jane was a former chairman of the Hardy Plant Society. It was originally bred from seed from Jane's mother in Albany, Australia and becomes a very sturdy and vigorous plant once it has settled down. It grows to about 2ft in height with large deep terracotta and yellow flowers that have a delicate fragrance, flowering in June/July. It thrives in most soil conditions in a sunny position and one grower in the scheme has also grown it successfully in a large pot on the patio as well as in the border.

The HPS Historian, Jennifer Harmer, thinks that Jane had given 'Albany' to a couple of nurseries but it is very uncommon in commercial cultivation and there are currently no entries in the 2012/2013 RHS Plant Finder.