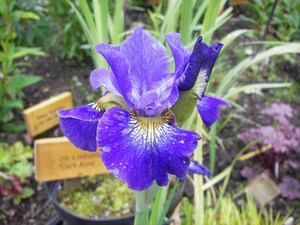 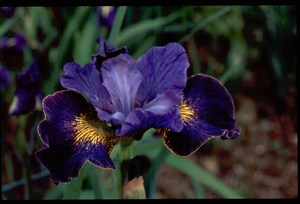 This lovely and robust herbaceous perennial starts blooming in the south of England in June and continues into early July.

It is quite a tall plant (but does not need staking), growing to around a metre in height with flowers held above the grass-like foliage. The flower standards are described as violet-blue with darker veins and the falls deep blue-violet with gold signals and edges which makes for a striking combination. It appears to prefer more moisture-retentive soil as it has flowered particularly well in 2013 after the wet autumn and winter of 2012.

Propagation is by division but it is recommended that pieces taken from the parent plant should have at least three ‘fans’ of leaves otherwise it may not establish well.

Iris ‘Peter Hewitt’ received a well-deserved Award of Garden Merit from the Royal Horticultural Society in 2005 as well as the British Iris Society's Dykes Medal in 2008.

It desrves to be much more widely grown but there are only 2 listed suppliers in the 2013/14 Plant Finder.