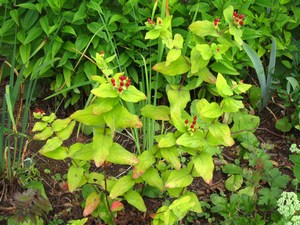 This Hypericum was originally obtained by one of our members from Blooms of Bressingham many years ago (Alan Bloom being a founder member of the HPS) and was introduced to the Conservation Scheme in 2010. It is a hardy, deciduous, small shrub with an open habit which is a delight in the spring garden where the newly emerged, pale, lime green foliage lights up the shady border. The foliage turns gradually to green as the season progresses and the shrub develops small, bright yellow ‘Rose of Sharon’ flowers approximately 2.5cm in diameter in May/June. These, in turn are followed by red and finally black berries in July and August which are attractive in the garden and floral arrangements.

‘Ysella’ can suffer from rust like many of its relatives but that varies from season to season and I purchased a much heralded ‘rust-free’ alternative called ‘Golden Beacon’ in 2012 in order to compare the two only to find that it developed rust where ‘Ysella’ did not. Leaf-cutter bees appear to like the leaves of this Hypericum in particular as they cut almost circular pieces out from the edges to make nests for their eggs (not to be confused with the nibblings of vine weevil). However, this does little damage and does not affect the shrub adversely so is worth tolerating and even taking the opportunity to observe these fascinating creatures.

Hypericum x inordum ‘Ysella’ can be pruned to shape as necessary and reaches about 1metre height and spread so is particularly suitable for small gardens. It is best planted in semi-shade as bright sunlight can scorch the leaves but it appears to grow well in most soil conditions. Propagation may be from semi-ripe cuttings in summer or hardwood cuttings in autumn and it should be placed it where it can be seen in the spring against an evergreen backround, a dark wall or amongst other shrubs. Planting blue-flowering spring bulbs beneath it also provides a striking contrast.

Up in Cheshire, a grower also says of Hypericum x inordum ‘Ysella’:
“When I saw Hypercium x inodorum ‘Ysella’ in my batch of plants to take home from the Conservation Scheme Plant Swap I was very unimpressed. I asked how it was different to any ordinary hypericum and I was informed that from spring to mid-summer the foliage was lime green. I still wasn’t impressed. I took the plant home and found a place for it in dry shade/part shade in one of my borders.

Nearly eighteen months later in April 2013 I was looking out of the bedroom window and my attention was caught by this golden green shape. Upon investigation I discovered that it was ‘Ysella’. For the next four months it continued to catch my eye, not in a bold, brassy way but in an uplifting manner – it brightens up the surrounding mellee of green foliage. In mid-August ‘Ysella’ is still glowing and the single yellow flowers have now turned to red berries, which will eventually ripen to black.”

There was only one referenced supplier in the RHS Plant Finder 2013 which is Ravensthorpe Nursery in Northamptonshire and this is a great pity as it is a versatile shrub well worth finding a place for in your garden.