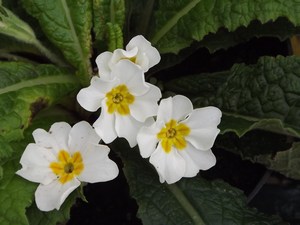 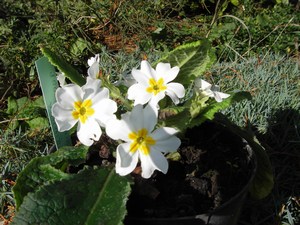 This plant was originally found more than 100 years ago as a sport in the wild primrose growing in Cornwall.

It looks similar to our native wild primrose but for the fact that the flowers are white with a prominent yellow centre. These are normally produced in the spring but plants produced from division early in the year may flower at any time up until late autumn. The flowers are attractive and early in the year the white petals create a shining focus alongside other spring flowers of a different colour. They provide a sharp contrast to the leaves which are usually dark green and crinkled.

It is a clump forming plant growing rather slowly and like all members of the Primula family preferring shade or light shade to full sun and fertile damp soil.

It is very easy to divide by breaking the crown into separate pieces. Each part will grow successfully but they are better grown in a pot initially, with possibly some protection such as in an open cold frame. Once they are well established they may be planted out into the garden.

This Primlua is pollinated by bees and viable seed will be produced. Like many of the family germination may be erratic, slow and light is usually needed. Sowing on the surface of compost will produce better results and giving the seeds a cold period before sowing will often also enhance germination. Therefore sowing as soon as the seed is ripe would be of benefit.

It has only been grown by a small number of HPS groups and only with limited success.

Although it has not been widely grown it deserves a place in the garden in positions where members of the Primula family would grow well because of its pure flower colour lighting up a semi-shady spot. This is a very highly recommended characteristic.

The lack of popularity may be for a number of reasons. Many new hybrids with a very wide range of colours which look good in the garden and are eye-catching are very easily produced and are readily available commercially. It does not seem to grow well in drier situations unlike many of the newer varieties but this problem can be overcome by planting it in good moisture retentive soil.