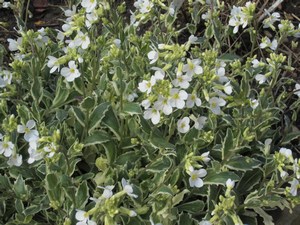 This plant was introduced by the current local HPS conservation coordinator for Shropshire and is an old variety that has nearly been lost to cultivation. It has not been listed by any supplier in the RHS Plant Finder for at least 5 years but is considered by those who grow it to be a little gem, particularly in Shropshire, where it has been circulating for a long time.

It's identity has been verified by the description and illustration on the website of a German nursery (more details on the HPS website conservation section) ands Millrace Nursery in Garforth, Yorkshire.

The foliage is dark green with lighter green veining and a pale cream edge to each serrated leaf which can give the appearance of being dusted by frost. The leaves may even develop a pink flush in early spring in cold weather. Clusters of white flowers with yellow centres appear from around March but even when not in flower this plant lights up the front of the border with its foliage for most of the year.

It forms a steady,spreading clump of approximately 15cm high in flower and about 60cm across.

If there is a minor criticism it's that the plant can look a bit sparse and forlorn in the depths of winter but it more than makes up for it when new leaves emerge and the whloe plant forms a tidy, bright mound in spring.

This Arabis needs a sunny, well-drained site to thrive as it's ancestors are found among rocks and cliffs or in poor soils. It may be propagated by division or tip cuttings and is suitable for growing in a rockery, trough or at the front of a well-drained border.

The author of this feature has been growing it at the front of a raised border above clay, has put a dressing of fine gravel around the crown and the plant has responded well during the last two and a half years.

It is currently being grown by HPS groups in Shropshire, Cheshire, Derbyshire and the Isle of Wight. 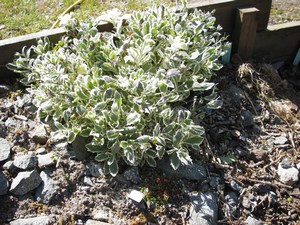 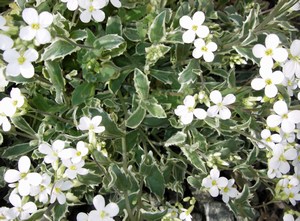