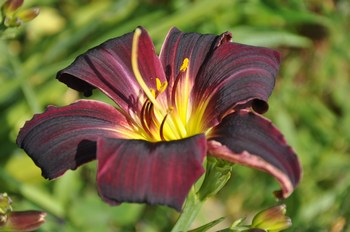 This plant was introduced to the conservation scheme in 2013 having been purchased originally by a local HPS member from Apple Court Gardens and Nursery in Hampshire in the late 1980’s. It has been grown and passed round on the Isle of Wight since that time and has always generated a very favourable response from those who have grown it despite the fact that there are now hundreds of Day Lilies (Hemerocallis) to choose from today.

Introducing the plant to the Conservation Scheme involved a bit of research into its history and after contacting the National Collection Holder there was initial disappointment when it was revealed that Diana Grenfell, who introduced this Hemerocallis, never registered it.

After some more searching, contact was eventually made with Diana who was able to provide more background.

Hemerocallis ‘Apple Court Damson’ was one of the results of a batch of seed received from Ron Jinkerson in America some years ago when Diana and her husband owned Apple Court. One of the parent plants from which the seed was obtained was Hemerocallis ‘Joan Senior’ and it is apparently not unusual for white/cream flowered cultivars to produce purple or darker offspring.

There were damson trees at Apple Court and this factor influenced the naming of the plant featured here.

Hemerocallis ‘Apple Court Damson’ has strap-like foliage to around 35cm then the flowering stems or scapes are held around 20-30cm above this depending on soil conditions. It flowers from mid-June until well into the third week of July and, true to its name, the flared flowers are a stunning, rich deep damson with a lime, almost luminous throat.

Like most Hemerocallis this one performs best on soil that does not get too dry in the summer and a position in full sun brings out the deepest flower colour.

Propagation is by division in spring or autumn and the plants are mainly pest and disease free apart from the need to be observant when the flower buds start to form and remove any that are stunted and distorted as they are likely to be infected with Hemerocallis gall midge larvae. There is no known treatment for this at the time of writing and all infected buds should be destroyed.

In making contact with Diana Grenfell it was discovered that she had not taken ‘Apple Court Damson’ with her when she moved which she greatly regretted so it was lovely to be able to reunite her with her introduction by posting a plant back to her as a ‘thank you’ for the valuable information she was able to provide.

Thanks are also due to George Feltrup of the British Hosta and Hemerocallis Society who gave permission for the HPS to use his super image of this plant.

There are two nurseries currently listed in the RHS Plant Finder 2014 as suppliers of Hemerocallis ‘Apple Court Damson’.