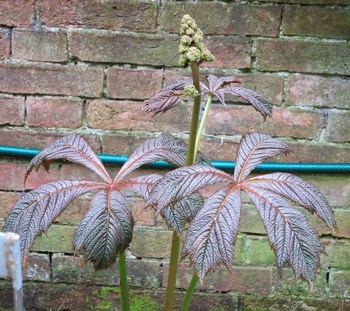 There has been a bit of a mystery and a fortunate set of coincidences that have led to more information about this Rodgersia. It had been introduced to the Conservation Scheme some years ago by the then coordinator via the Rodgersia National Collection Holder but little information had been forthcoming from growers until a contact was made via the Nottinghamshire Group of the HPS who had obtained a plant. This HPS Group has managed a walled botanic garden at Wollaton Hall since the early 1980’s and Rodgersia podophylla ‘Instow’ is thriving in their Saxafragaceae border. One of their members, Sandra Denham, kindly offered to provide more information after doing some further research and this edited article is the result of that work.

Rodgersia podophylla ‘Instow’ was found at Tapeley Park, Instow in the 1980’s. Tapeley Park is a Grade II listed country house located near the village of Westleigh in Devon which is open to the public and owned by the Christie family (who also owned Glyndebourne in Sussex). The plant in question stood out as different due to its form, stature and spectacularly-coloured leaves and this was noticed by one visitor. At the time of his visit there were pieces of rhizome scattered on the ground around the area which were collected and one of which was given to the then National Collection Holder.

The following year Tapeley Park had a ‘makeover’ and that area of Rodgersia was bulldozed to make way for some designer’s new plan so it no longer exists.

Rodgersia are members of the Saxafragaceae family. They enjoy moisture-retentive soil that never dries out in sheltered part shade. Their inflorescences appear in June/July and may reach up to 2m. Some have leaves which are green in the spring, copper or bronze colour in the spring and autumn and some have a lovely metallic sheen in spring. All have impressive leaves and R. podophylla grows wild in Japan and Korea.

The variety ‘Instow’ named after the place in which it was found is clump forming in contrast to most podophyllas which seem intent on taking over the world. It is also relatively free-flowering with 1.5 metre inflorescences of white flowers in an airy panicle and has, as already mentioned, spectacularly coloured leaves that change throughout the seasons.

Sadly there are no suppliers in the RHS Plant Finder but a plant has been given to the current coordinator and it is hoped that those plants already in circulation will make their way back to the scheme for wider distribution of a very garden-worthy plant.

The National Conservation Scheme of the Hardy Plant Society is grateful to the HPS Nottinghamshire Group for their detective work and permission to use their images of the plant and also to Sandra Denham for writing the article with information provided by Heather Booker, the former National Collection Holder of Rodgersia.

More information about the work of the Nottinghamshire Group and their involvement at Wollaton Hall can be found on their website www.nottmhps.org.uk and similarly for Tapeley go to www.tapeleygardens.com Heather Booker’s garden at Lee near Ilfracombe on the N. Devon coast is open under the National Gardens Scheme most days from April through September but it is wise to check first. Details in the NGS ‘Yellow Book’ or county information leaflets. 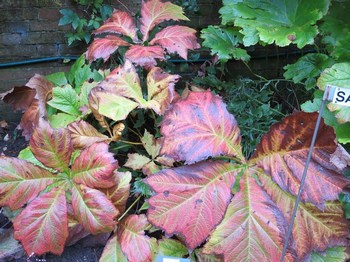