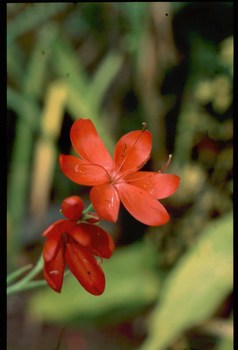 Hesperantha coccinea ‘Cindy Towe’ started as a seedling in the garden of June Towe in Little Hereford near Ludlow and given in 2004 to Jennifer Hewitt who introduced it to the HPS Conservation Scheme. It was named after one of June Towe’s flat-coat retrievers.

It has larger flowers of a deeper, richer red than the type. (The type matches Red 45C on the Royal Horticultural Society’s Colour Chart, while ‘Cindy Towe’ matches 46B.) Flowering time is usually from late summer to the first frosts and sporadically into winter in milder pats of the country.

It has proved to be quite hardy having survived the winter of 2010-11 in several Shropshire gardens.

‘Cindy Towe’ should not be allowed to develop seed as any resulting seedlings cannot be guaranteed to have the same qualities as the parent plant. Hesperanthas may be propagated by splitting an established clump in the spring and they appear to be relatively pest and disease free.

There were only two suppliers of this plant listed in the RHS Plant Finder 2014.