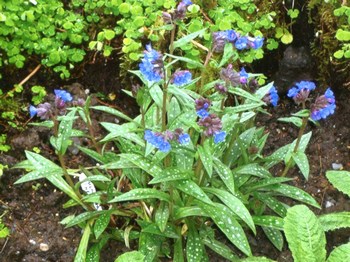 Pulmonaria ‘Netta Statham’ was introduced to the HPS scheme in 2003 by the Scottish and Northern Borders Group.

It is believed to be a hybrid, found by Margery Fish and named after her friend Netta Statham who gardened at Erway Farm in Shropshire. It is not mentioned by either lady in their published books.

In the HPS booklet ‘Pulmonarias’ written by Jennifer Hewitt and published in1994 it is described as having leaves that are almost entirely silvery, and flowers of a good royal blue with no trace of pink at all. Apparently Netta Statham, a keen gardener and founder member of the HPS, strongly disliked the usual pulmonaria combination of pink and blue flowers. After she left Erway Farm she requested that plants from the garden should not have her name attached as they were no longer true blue. Stephen Lacey in his column in the Telegraph in 2012 remembered selecting a superb pulmonaria in Netta’s garden (close to his own), and after giving a piece to a Suffolk nurseryman discovered that it had been named ‘Netta Statham’ and passed to the Beth Chatto nursery. It may therefore be difficult to verify the name of the plant currently in the scheme, especially as the leaves are different from the description in Jennifer Hewitt’s booklet.

Since 2003 it has been grown by a number of Hardy Plant Society members in gardens across the UK. It is considered to be a distinct plant and garden worthy, but rather weak. More recent reports from growers are at variance with the description given above, all stating that the plant has long, narrow leaves with small evenly spaced silvery spots. It is a compact plant, average H 25cm x S 25cm. The flowers are gentian blue on upright stems and it flowers over a long period. It is fully hardy, best planted in semi-shade in soil that does not dry out completely as it is prone to powdery mildew in dry conditions. Leaves may be damaged by slugs and snails. Propagate by division only as seed, if set, will not come true.

Listed by only one nursery in the RHS Plantfinder 2014, but after checking with that source it is not currently available for sale.