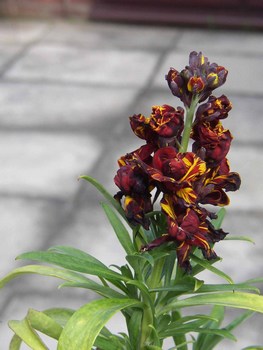 This very old Erysimum was introduced to the scheme in 2010 by the Norfolk & Suffolk Group. It is one of only two double-flowered varieties of perennial Erysimum (the other being E. ‘Harpur Crewe’). Wallflowers with both single and double yellow flowers were mentioned in Gerards Herball of 1597 and a double red type known as ‘Bloody Warrior’ supposedly originated around that time.

The plant, a member of the brassica family likes full sun and well-drained neutral to alkaline soil reflecting Aegean Mediterranean origins from where it was supposedly introduced to Northern Europe by the Romans. E. ‘Bloody Warrior’ is a short-lived perennial and as it tends to become rather woody and leggy is best renewed from cuttings every 2-3 years.

It is however worth the trouble for the double flowers which open with yellow tints, but darken to a deep red and are heavily scented. Flowers usually appear in April and May (sometimes earlier) and continue through early summer. It is best placed where there is some shelter from wind, both to appreciate the scent, and to protect the plant from blowing over. Average height is around 30-45cm and is best given a light clipping over after first flowering which may give a second flush. Propagate by cuttings in summer or autumn which should strike easily. It is fairly untroubled by pests and diseases.

Plants are just coming into flower in mid-April 2015 in Worcestershire. Although 3 suppliers are listed in the RHS Plant Finder 2014, there is only one nursery actually offering plants for sale.