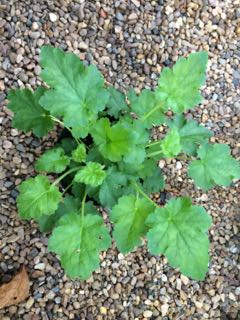 Heuchera x brizoides ‘Snowflakes’ was introduced by Norfolk & Suffolk Group in 2002 as a good garden plant that was little known and has been verified by Blooms of Bressingham. It has since been grown by many local groups around the UK.

Alan Bloom of Bressingham Nursery in England was a pioneer in heuchera hybridisation. All brizoides hybrids have H. sanguinea, native to the south-western United States, as the main part of their heritage, and with that they tend to be tolerant of heat and drought. H x brizoides ‘Snowflakes’ was included on the HPS stand celebrating 50 years of the society at the Chelsea Flower Show in 2007, earning it’s place as a plant introduced by the first president of the HPS. Alan Bloom mentions it as a good variety in his article discussing his work with Heucheras for the HPS 10th Anniversary Handbook (P23).

It will grow in any free-draining garden soil in sun or part-shade and is tolerant of dry shade under small trees and along woodland edges. However it seems to need some protection from excessive winter wind and wet and does not thrive when crowded by larger herbaceous plants.

Plants are compact with small bright to lime green, rounded, lobed, toothed leaves that colour well in autumn. Average height and spread is 30cm with flower spikes (to 45cm in good conditions) having numerous pink buds opening to dainty, fluffy white flowers. The flowering period lasts for many weeks with new spikes forming throughout summer into early autumn. 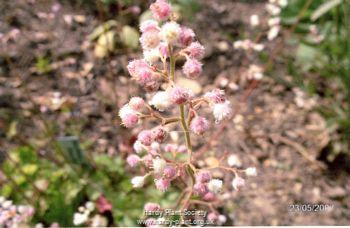 Propagation is not difficult with divisions and cuttings rooting in a cold greenhouse or cold frame.

As with all heucheras, it is susceptible to slugs and snails and vine weevil, although less troubled by weevil when planted in the ground rather than in a pot.

It is not listed in the 2015 PlantFinder and has not appeared for a few years.