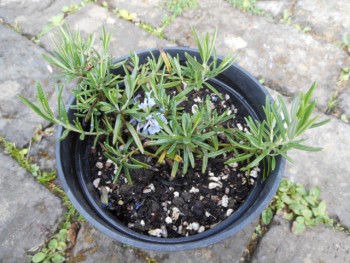 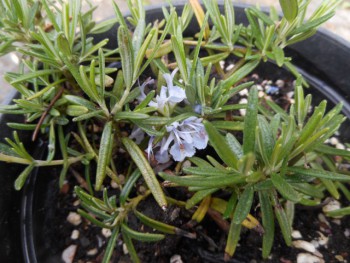 It may be the conservation plant with the longest name, but we have collected very little information about this plant since it was introduced to the scheme by a Worcestershire member in 2008. Indeed there is not even a photograph of it in the image library, although I have just noticed that a small plant from the Isle of Wight group has just opened a few flowers.

The plant originates from California, where it was spotted by Elizabeth de Forest in the garden that she created with her husband, Lockwood de Forest Jnr, a landscape architect. The couple founded and edited ‘The Santa Barbara Gardener’ journal from 1925-1942, combining Elizabeth’s plant knowledge and Lockwood’s commentary on design.

Elizabeth de Forest described this rosemary as a vigorous plant, with a heavy branch structure, dense green foliage and flowers of a pale, light-blue - the colour of the old French air force uniform. She speculated that it was a hybrid between R. officinalis and R. officinalis ‘Prostratus’ that had arisen spontaneously in their garden and then propagated from cuttings as her husband was fond of plants with aromatic foliage. It was not until after his death in 1949 that she realised ‘Lockwood de Forest’ was the name being used, but she also wrote that it became the most common prostrate rosemary cultivar in Santa Barbara.

Although the origin of this cultivar might suggest that it may be more upright than a true prostrate rosemary it is described in two online nursery catalogues as having pale blue flowers whereas the scant information from the HPS Conservation scheme mentions large deep blue flowers.

As expected it does best in sun in well-drained soil and can be propagated by semi-ripe cuttings.