Cornucopia - A Botanical Garden with a difference

A Botanical Garden with a Difference
Don Whitton 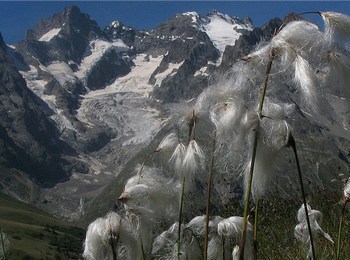 Whilst on holiday last summer I had the good fortune to stumble across perhaps the most unique garden I’ve ever come across in all the years I’ve been garden visiting.

Standing at over 7000 feet above sea level, the Lauteret Alpine Botanical Garden is an absolute delight. It is carved out of the wild landscape at the Col de Lauteret on the edge of the Ecrins National Park – France’s largest and highest National Park. The backdrop was truly awe-inspiring with majestic 12000 foot jagged mountain peaks and huge glaciers looking down on the garden.

The garden is open for a mere three and half months during the summer as it spends six months of the year under snow! Despite this the garden still welcomes around 25,000 visitors in that time.

Incredibly, the garden was established as long ago as 1899 and was a combined initiative between Grenoble University who still administer it, the manager of the Lauteret Pass Hotel (with a commercial interest I’m sure), and the Touring Club of France (motoring days out in 1899!!).

The 6 acre garden consists of over 80 island beds depicting flora from every mountainous region in every continent. Plants from mountain ranges such as the Drakensburg in South Africa, the American Rockies and the Caucasus in Eastern Europe were all grown in separate groups and every plant was labelled – there being over 2000 species in total – a real joy. The sloping garden is bisected with a number of natural streams which have been diverted and, in places dammed to provide cascades and small ponds to enhance the whole. (No need for pumps and butyl liners here.)

Mixed in between the island beds were large areas of natural Alpine meadow adding a kaleidoscope of colour in the first week of August. The floral displays were both colourful and varied and certainly not all low hummocky Alpine domes. There were some small trees and bushes to add shape and shade and many of our garden perennials which hail from mountain areas were here on display, albeit smaller than they would be at lower altitudes. These included the large orange blooms of Lilium bulbiferum from the central Alps, Centaurea alpestris, a striking pink flowered form of our common knapweed and Ramonda myconi with large gloxinia-like violet/blue flowers which grows in shady rock crevices in the Pyrenees.

The 5 Euro entrance fee included an 8 page guide and map (English versions available) which stated that you would need an hour to see the entire garden – we were there for over two hours. And then there was the nursery, well stocked with everything from Eryngium to Erodium, Knautia to Kniphofia plus plenty of our rock garden favourites. Phloxes and penstemons continued the colours making the whole thing a surreal sight in this high mountain setting.

The only thing missing was a restaurant but guess what? The Lauteret Pass Hotel is still there just a short walk down the slope and a nice hot chocolate on the terrace in the Alpine sunshine was the perfect way to finish off the visit.

P.S. For those who are interested there is a web site. It’s all in French but there are loads of pictures of the garden and individual plants in the image gallery. The web site is at sajf.ujf-grenoble.fr

First published in the South Pennine Group Newsletter Winter 2008
and subsequently in Cornucopia Issue 25.
© Copyright for this article: Don Whitton