Cornucopia - A tale of Trilliums

A tale of Trilliums
John Rogers 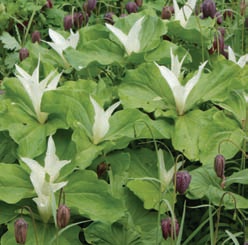 On the last day of the group’s trip to Ireland in 2004, I bought a Trillium luteum. It was an average plant with just two leaves, if memory serves, in a four inch pot. When we got home it was duly planted in a suitable spot and it grew well, dying down at the end of the season. The following year it did not appear and I assumed it was dead. Likewise 2006. By 2007 I had completely forgotten about it. Imagine my surprise, therefore, when this year what looked like a trillium leaf came through the soil. Eventually it developed three leaves and a yellow flower confirming it was the long forgotten luteum. Three years ‘dormant’!

I was told trilliums can be difficult to establish, but three years below ground?

Once again on the group trip, this time to East Anglia in 2006, I saw trilliums growing at Blooms of Bressingham which became must haves. I can’t remember where I eventually bought them but we returned home with three: - albidum, vaseyi and an Askival hybrid.

All duly planted and you can guess, 2007 not a sign of any of them. This year the albidum emerged and produced three flowers, the Askival hybrid produced one leaf, albeit a very healthy one, and of the vaseyi there was no sign. I live in hope.

First published in the Staffordshire Group Newsletter Autumn 2008
and subsequently in Cornucopia Issue 25.
© Copyright for this article: John Rogers
Picture by Keith Ferguson, taken from his article “The woodland plants of North America: East to West”