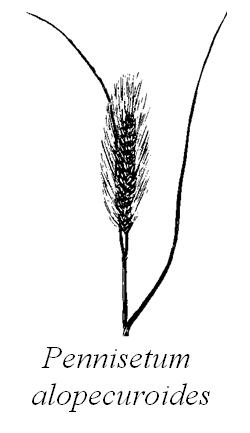 Pennisetums are attractive grasses and some cultivars are appearing in garden centres. Unfortunately little or no information is given about their hardiness. Stall holders at plant fairs may also need to be pressed for details. You require affirmative answers to two questions before making a prediction about survival through the winter. “Is it hardy and is it a perennial?”

We have sold Pennisetum macrourum [Ht 1.5 m] for many years. It is bone hardy this far north and its long fluffy, grey-green, pencil-shaped inflorescences look wonderful on an isolated specimen or in a mixed border. It is semi-evergreen and this presents something of a dilemma when the time comes to cut down the large grasses at the end of March. We recommend selectively removing the dead leaves and not cutting down the whole plant. It is a bit tedious, but it pays off.

Pennisetum alopecuroides 'Hameln' is readily available in specialist nurseries and some garden centres. It too is hardy and its bottlebrush inflorescences are attractive. It looks well in a pot, but I prefer to see this near the front of a border. A number of cultivars are making their way onto the market. P.a. 'Little Bunny' is an apt name for one of the smaller versions of 'Hameln'. Temperature is a critical factor for flowering.

Pennisetum orientale [AGM] and its half a dozen cultivars ('Karley Rose' being the most well known) are more spindly, but pleasing in large clumps. We always thought it was borderline hardy, but it seems to survive well in well drained soil once established. We prefer to have ours in a large pot in the courtyard and take it into a cold greenhouse in winter.

Invariably at plant fairs and shows, and when we give talks on ornamental grasses there is a question which begins “I bought a wonderful dark red grass with fluffy flowers, which died in the winter ...?”. In all probability this is Pennisetum setaceum 'Rubrum' [AGM].

It is not hardy. We provided it with shelter from wind and rain and did not cut it back — advice given in ‘The Garden’ — we lost it. We are too far north. For the past two years we have brought it through at 5°C plus in a heated greenhouse. Last winter on two very cold nights I got out of bed, dressed and brought it into the house. This dedication has paid off because I now have a very mature plant. In February during a stay with a friend, who manages farms in Morocco, we discovered hundreds of Pennisetum setaceum 'Rubrum' in a garden centre. They were well over a metre in height. Close examination gave me a clue about the best way to propagate them. It has proved successful and the secret will go with me to the great compost heap in the sky.

Pennisetum setaceum (the species which originates in tropical Africa, SW Asia and Arabia) is attractive but less colourful and fares a little better. It will survive through the winter if treated as a pelargonium. You have the choice of heat and protection for P. setaceum or just buying a packet of seeds.

At Lincolnshire Show 2007 we negotiated with a nursery colleague for a grass we had not seen before - Pennisetum thunbergii 'Red Buttons'. It looked impressive, about 20 cm in height with dark red, bottle-brush inflorescences. We planted it in a galvanized bucket and gave it pride of place in our new Mediterranean courtyard garden. It quickly doubled in height and then lost its colour. In our view it was not garden worthy.

However, on a visit to Harlow Carr during autumn 2007 we noticed that clumps of P.t. 'Red Buttons' had been used in the corners of beds in the long borders. We thought it unlikely it would be given a second chance. We were proved wrong and on Boxing Day 2008 discovered even bigger clumps. In July 2009 the grass looked stunning and its lack of colour was irrelevant.

Pennisetum incomptum has a rather spreading habit, but this grass is most attractive and worth considering in large garden. It has pencil thin pink-white inflorescences, which stand erect over arching foliage.

Pennisetum glaucum 'Purple Majesty' first made an entrance at the Four Oaks Trade Show in September 2003. We were very taken with this statuesque plant. Its broad leaves become increasingly rich purple as summer advances. In late summer it bears a single dramatic purple flower on each stem. Few of the seed suppliers had stocks and they would not sell in manageable quantities to a small specialist nursery. We had to wait for the plants to appear in garden centres in 2005 at £4.99 or more. This is quite a lot to pay for an annual. The article on grasses in the August 2008 edition of ‘The Garden’ stated this grass is a perennial. We beg to differ and along with other growers on both sides of ‘The Pond’ believe it to be an annual.

If you decide to collect seed, remember that the seedlings are not guaranteed to come true - you will have to be selective. In our experience most of the offspring are pretty dark in colour, but not at first. It is good in a pot or as a dot plant in a border, but to retain its intense colour you must remember to keep it moist.

During our visit to Loire Atlantique in July/August 2007 we saw it used to great effect in street planting. Close scrutiny of the soil revealed irrigation pipes. Unfortunately drying winds have a tendency to shred its leaves.

First published in the East Yorkshire Group Newsletter, November 2009
and subsequently in Cornucopia Issue 28.
© Copyright for this article: John Summerfield

This article was taken from a copy of Cornucopia that was published in 2011. You could be reading these articles as they are published to a national audience, by subscribing to Cornucopia.