We have been propagating ornamental grasses since a landscaper with commissions for large industrial sites asked us to supply her. That was about sixteen years ago. I took an instant liking to these elegant and graceful plants. Although there are several genera which can be considered large or tall grasses I always associate that description with Miscanthus.

A friend found me a second hand copy of a book published more than thirty years ago by Roger Grounds. At that time a few ornamental grasses had been and were being used in large gardens. This was his first attempt to popularise them in the UK. Patently he was unsuccessful because it was not until his now famous and much treasured The Plant Finder’s Guide to Ornamental Grasses released in 1998 that interest began to take off. His later publication Grasses [2005] has superb photographs, but is more a coffee table book.

We know from plant fairs and responses to our talks that ornamental grasses are not to every gardener’s taste. Apart from the lack of distinctive colour their names seem to be an obstacle because many people take pleasure in being able to identify every plant in their borders. The complexity of the names of some grasses can be daunting and name changes do not help. Dipping into the 1979 edition of Ornamental Grasses brought this home. Thankfully Imperata sacchariflora, Miscanthus sacchariflora, Eulalia japonica and Saccharum japonicum are now all classified as Miscanthus sinensis.

There are about 100 cultivars of Miscanthus sinensis (commonly known as Chinese silver grass). There is a great temptation to keep adding to our stock, which I have to resist. Potential purchases must now pass the ‘significant difference’ test and I have to negotiate with the managing director.

Miscanthus originate in wet meadow lands, but they will grow in almost any soil provided there is a reasonable amount of sun. A newly planted specimen may take a couple of years to become established. They require little attention other than cutting down, which should be done at the end of March or as soon the new shoots get to about 10 cm. You may find a few semi-mature culms (stems), whose growth was arrested when the temperature began to drop in the previous autumn. If you can steel yourself, they should be cut out as well. 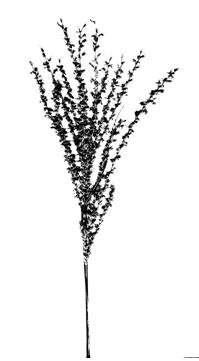 Most of us have been around long enough not to trust or believe everything we read. Many older books refer to Miscanthus being increased by division or seed sowing in spring. Beware the latter: seed taken from cultivars does not come true and anyway seed collected in the garden is unlikely to be viable because just as the seeds are forming in the autumn temperatures begin to fall. Miscanthus are warm season grasses and as such should only be divided in a relatively short six week ‘window’ (end of April through to June). If you are not in the business of producing plants for sale, resist the temptation to break a root ball into tiny pieces. Large bits will take without any problem.

One of my little frustrations is helping customers who say they want a tallish grass but are obsessed with height or rather, the lack of it. There is a belief that small gardens and their owners cannot accommodate anything tall or large leaved. Invariably the suggestion they should consider a 1.2 – 1.5 m Miscanthus is strongly resisted. When my sales technique is flagging, I quote a Filipino nurse living in London with a small walled garden, who says she packs the space with large leaves and tall grasses to remind her of home. The picture of this tiny figure in her garden is wonderful.

Sometimes we have to put customers’ minds at rest. There are natural concerns about running and seeding around. The latter, as already explained, is not an issue with Miscanthus. With one exception we can give assurances they are all clump formers. A privately published book on Garden Grasses, Rushes & Sedges, which I bought for reference, described Miscanthus 'Gotember' as “very like 'Gilt Edge': more yellow on leaves. Not very vigorous”. Miscanthus x giganteus 'Gotemba' turned out to be a beautiful fast spreading thug. We sell it on condition buyers promise to plant in a large pot and not their garden. The warning is tactfully pressed home until we get assurances. One woman at Driffield Show said it was not a concern because she had several acres of garden and it was welcome to run wherever.

Unless we are approached with a list or a specific request for a Miscanthus cultivar, we employ a strategy to aid decision making. Our first question is “how tall?” The cultivars range in height from 'Little Kitten' at about 50 cm (20 inches) to 'Roland' at 3 m (10 feet).

Question two relates to the form of the inflorescences. Does the prospective owner prefer upright, upright and open or arching. M.s. 'Undine' (Ht. 1.2m) with upright coppery-pink panicles is a winner in the first category closely followed by M.s. 'Russia' (Ht. 90 cm), which has a dark ginger head. The latter arrived via one of Gail’s students, who was friendly with a nurseryman, who had collected it in the wild in the USSR several years before. For a number of seasons we trialled it before deciding to produce more. Most years it has superb autumn colours. Of course it is not possible to guarantee wonderful tints every year because climatic conditions have some influence.

The curved or gracefully drooping inflorescences are exemplified by M.s. 'Flamingo' (Ht. 1.4 m.). One of our earliest and most dramatic acquisitions was M.s. 'Silberfeder' (Ht. 2.0 m.). Its curved inflorescences hold well, right through the winter, when they are a good source of seeds for birds. It is worth mentioning at this point that although Miscanthus stems die towards the end of autumn the high silica content enables them to stand right through into February/March and their plumes look wonderful covered by frost. 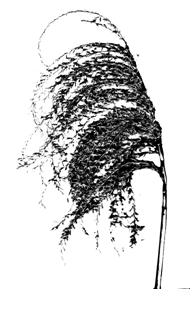 Leaf width may also be a consideration in making a decision. A number of cultivars have narrow leaves (approx. 0.5 cm). The smaller members of the family with fine leaves look well in pots. Miscanthus sinensis 'Yakushima Dwarf' and M.s. 'Kleine Silberspinne' are notable examples. If you have plenty of space, varieties from the tall so called Emerald Giant Group would certainly give your garden impact; their leaves are broad and the plants over 1.7 m. Miscanthus sinensis var. condensatus 'Cosmopolitan' (v) and 'Cabaret' (v) are both variegated and widely available. Several years ago I spotted that a segment of the 'Cosmopolitan' growing in the curtain alongside our drive had reverted to the green leaved form. One of our sources warned “probably weakly growing and seldom flowering in the UK”. The RHS Miscanthus Trials reported that it did not flower. Certainly this is not our experience, and we have adopted for our advertising and the header for all our talks a picture of the sumptuous silver plumes of Miscanthus sinensis var. condensatus 'Cosmo Revert' (2.5 m) – sometimes referred to as 'Emerald Giant'. It has turned out to be very popular and I am surprised to see in The RHS Plant Finder it is stocked by only seven nurseries.

In the early days on excursions to nurseries in the south we picked up two very large Miscanthus, which during propagation I carefully labelled so as not to confuse the offspring. Miscanthus floridulus and Miscanthus x giganteus were so similar I could not tell them apart. Eventually the problem was solved by an edict from Kew stating they are one and same. This formidable plant has been less popular since farmers in this region have been growing fields of it for fuel in local power stations.

The apparent lack of colour in true grasses is often given as reason or perhaps an excuse for not using them in gardens. They may not have the bursts of colour we associate with blooms on perennials and bedding plants, but wonderful tints certainly add something to mixed borders. Their primary function is to provide shape, form, and movement. The sound of tall rustling grass takes some beating.

Some years ago on a visit to Harlow Carr in autumn we reacted to the intensity of colour in the burgundy-red inflorescences on M.s. 'Rotsilber' (1.5 m). Ours at home were no match. We were already aware Festuca glauca 'Elijah Blue', after only one season in limey Winterton soil, became green and uninteresting. Clearly acidity is the answer and regular treatment with a solution of ericaceous feed restores the colour to both. The residue from a teapot also helps. 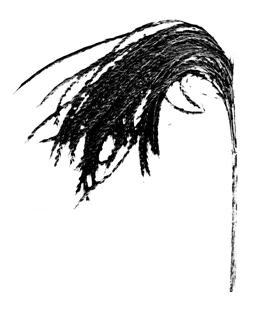 The search for evergreen grasses is a mission for some gardeners because very few true grasses meet that requirement. One reasonably tall species Miscanthus is reputed and reported by RHS trials to be ‘partially evergreen’. In our experience this far north Miscanthus transmorrisonensis (1.5 m) will in favourable conditions retain only traces of green in its foliage throughout the winter. This supposed quality is of little significance because form makes it garden worthy.

With one exception hardiness is not a problem when choosing a Miscanthus. The most stunning is Miscanthus nepalensis with its pale toffee coloured, fluffy plumes. Our first acquisition came with the warning that it was not very hardy. We thought this odd because obviously it originates in Nepal. Experience with some micro-propagated plants has taught us to harden them under cover through at least one winter before attempting to produce more. It came through the winter of 2008–9 in the garden without a problem. A lengthy wet and cold period in January to March 2010 almost did for it and there was no possibility of getting through the early months of 2011.

Last winter really put us to the test in North Lincolnshire. In an unheated polytunnel but well off the floor we lost all the stock of Miscanthus nepalensis in 1.4 litre pots grown from our own seed. At the Harrogate Spring Show 2011 a French visitor to our exhibit told us she had collected seed in the wild in Bhutan in 2010 and 2011 and she would send us some upon her return to Paris. She had discovered the grass growing at an altitude of 3000 metres in very poor, stony soil. We realised it may be necessary to grow them ‘hard’. Her seeds germinated quite well and we have potted them on in three different media - all free draining and without added slow release fertilizer. Development is slow, but to date they are surviving.

Very occasionally we discover miscanthus seedlings. I dig them up and grow on in pots for several seasons before deciding whether or not they are garden worthy. To date I have named and propagated two: Miscanthus sinensis 'Little John' (robust and 1.8 m in height) and Miscanthus sinensis 'Lella' (1.2 m). Others in my secret stash await judgement. If there continues to be a curb on buying in more cultivars, I will just have to produce my own.

First published in the East Yorkshire Group Newsletter, November 2010
and subsequently in Cornucopia Issue 29.
© Copyright for this article: John Summerfield

This article was taken from a copy of Cornucopia that was published in 2012. You could be reading these articles as they are published to a national audience, by subscribing to Cornucopia.