Last Month in My Garden: November 2011 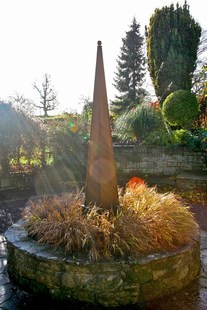 When the show of summer ebullience and autumn flowers fade, we have to look to other things to enjoy in the garden. Low, slanting sunlight can work magic on stems and leaves to great effect.

The stems of bamboo, especially those of Phyllostachys aureosulcata ‘Aureocaulis’, glow a wonderful, rich gold colour. They are revealed by trimming off the side shoots, about 1/3rd up each culm, and removing thin and old stems each year. A word of warning, cut the woody shoots off as cleanly and close to the stem as you can because their sharp edges can painfully snag the unwary gardener! Getting into the clump to cut unwanted canes out low down is often awkward and I have found that a good pair of ratchet secateurs is the best tool. This particular bamboo has made a 5ft clump over 16yrs but is not invasive. I remove the occasional exploring shoots, usually near the surface, and there is always a good home waiting.

The rich colour of Vitis viniferer ‘Purpurea’ foliage is glorious with sunlight shining through and worth positioning with that in mind. It comes into leaf late in the season and is late to loose them too. I grow one on the lathe fence to the south of the garden, together with the lovely blue Clematis viticella ‘Emiliar Plater’ flowering from early July for over 3 months. The interesting shape and colours of the vine leaves look great decorating a cheese board. 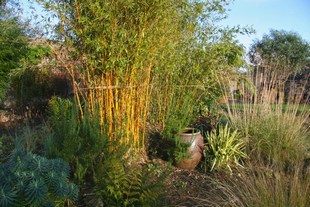 My favourite grass is Hakonechloa, and I am in danger of overkill in my use of it! The golden form H. macra ‘Aureola’ has recently developed more rusty colours, and really glows as it flows with every breeze, in the autumn sunshine. It is so temptingly tactile. Its slow growth is reflected in quite high prices, but turn your back on a small pot full for a few years and suddenly you have a large clump. I used to panic in spring when it was late to show, but it is very hardy.

I have it planted around a holly ball in a large rusty planter, and around a tall rusted steel water feature – I just love it!

When the leaves start to detach and make a mess, I give it a preen, leaving the stems until late spring – but not so late as to be in danger of cutting off new shoots with the old.

The plain green H. macra is also lovely with the added advantage of speedier growth, and is used to great effect bordering paths and steps.

Text and photographs by Heather Russell of the HPS North East Group.