Last Month in My Garden: December 2011 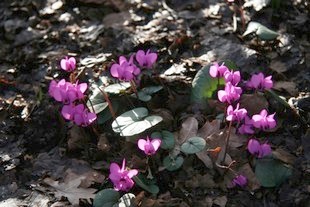 With the weather milder than usual, and certainly than last year, it has been good to get outside. Cyclamen coum are flowering here nearly three months earlier than last winter, but I hope that some of them will hang fire until February, as their bright pink flowers really cheer me up at a low part of the year. I planted some in gravel under a hedge, so that I can see them as I come in and out of the house, and the colony has grown well. They appreciate some shelter from wind, even if it is just from accumulated fallen leaves, but will take winter sunshine. All the areas of cyclamen have been dressed with a little leaf mould and bone meal, to encourage flowering and growth of the many seedlings.

Sow ripe seed into trays of leafy compost and put in a shady corner or under light shrubs, and you will be surprised how quickly it seems (3yrs + but you don’t have to DO anything, except maybe water occasionally) that you are able to plant out young corms or pot up to give away.

Cyclamen coum leaves are small and round with a purple/red reverse, whereas Cyclamen hederifolium leaves, true to their name, have an ivy leaf-shape, shiny with a silvery veining, As this hardy cyclamen flowers in August, and only for a few weeks, I value it most for the attractive, long lasting foliage, which is also good in posies for the house. I have large areas of this lovely ground cover from August through spring, in the dry part shade provided by shrubs. They are so easy and useful, growing in areas unsuitable for most other pants.

For Christmas I asked for lighting to be installed in the old potting shed, a stone built ‘lean to’ on the north side of the old wall, and very gloomy. Why we have waited so long I don’t know, but the accumulated muck and rubbish is now all too obvious, and trips to the tip are imminent. My longsuffering husband is shuffling stuff about in order to seal and paint the flaking walls. I look forward to pottering about in comparative splendour and comfort, on cold, dark and wet days as I have even been given a little heater. Bliss!

Text and photographs by Heather Russell of the HPS North East Group.