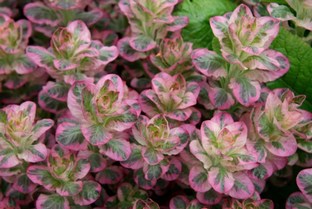 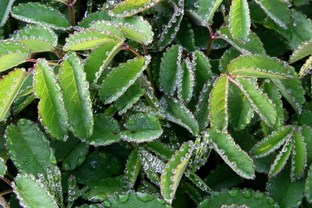 Flowers are wonderful, but in April, foliage is fabulous!

Vigorous and full of promise it surges up in lush green mounds. Not just ‘green’ but a gamut of shades of green, and in an amazing range of textures.

Lysimachia punctata ‘Alexander’ is, I think, an undervalued plant. I agree that L. punctata is a common and determined spreader, with less than charming dull leaves and yellow flowers, but the variegated form is a good plant. Shrimp pink shoots emerge in January, slowly unfurling with rosettes of leaves in a variegated cream flushed pink, until flowering in summer with spikes of softer yellow flowers over a long period. I grow it in dryish shade and find it well behaved.

Tender of complexion, gales and hail wreak havoc on new leaves, especially after unusually early mild spells such as we had last month. The translucent pink heart shaped leaves of a young Cercidiphylum are frazzled, but hopefully it will have a second flush of leaves.

So far untouched, the new golden foliage of Philadelphus coronarius ‘Aureus’ is lovely and teamed with long lasting ‘Golden Appledoorn’ Darwin tulips, Muscari latifolium - dark blue with a paler topknot - and yellow Erythronium ‘Pagoda’ it is a picture. 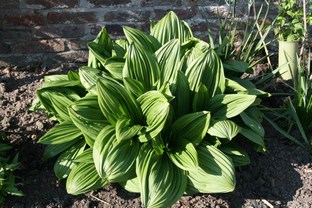 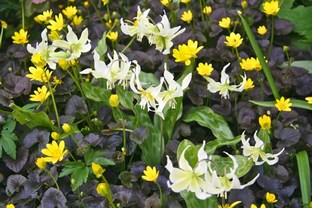 I listened to all the dire warnings about Ranunculus ‘Brazen Hussy’ – how it spread wildly and was impossible to eradicate, but some years ago I planted it just the same, choosing a spring border at the top of the garden between a path and the fence, and policed its progress suspiciously.

The glossy dark brown leaves have been a delight, reflecting the blue of the sky and a fantastic foil for the golden flowers, until disappearing by the end of May. The clump has expanded steadily, but I have been very careful to lift any strays, complete with miniature tubers, and dispose of them well beyond the garden!

Some years ago, a kind ‘Hardy Planter’ sent me some very pretty white Erythroniums (they are like that) and in late summer I carefully planted them into the spring border. What I didn’t realise until the following spring, was that I had put them plonk in the centre of the Brazen Hussy clump. It is an unexpected but effective combination and although I have intended to rescue the Erythroniums, I always forget later in the season. Maybe this year?